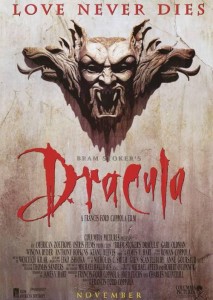 Francis Ford Coppola and co pulled out all the stops in this faithful retelling of Bram Stoker’s classic masterpiece about undead luvin’, everything short of hiring quality young actors that is…

The short version of the plot goes like this: When a renowned Transylvanian warrior finds that his much adored wife has taken her own life while he was out  and about crusading on the Lord’s behalf, Count Dracula he renounces the Church and gives himself eternal life just because of the passion of his speech!

The now undead through sheer force of will Count potters about his vast castle, eating babies, growing and training minions and influencing beings of lesser intellect to do his bidding. Gee that was worth hanging around hundreds of years for…

This all changes when his personal banker Jonathan Harker (Keanu Reeves) makes his wooden way across the seas to pay the Count a visit in order to have some documents signed and sealed. Unfortunately the last personal banker to make the journey went nuts shortly after and was confined to an asylum to eat bugs and alternately mutter under his breath and scream for his master at the top of his lungs, but still – a promotion is a promotion, even if it takes you away from your loved ones.

It is after the Count spies a pic of Harker’s missus awaiting his return in jolly old London town that the situation changes. The Count firmly believes that Mina (Winona Ryder) is not only the spitting image of his once beloved dead some hundreds of years, but is in fact her. And he in turn is destined to be with her.

So only after packing numerous ornate and resplendent outfits does the Count wend his way across seas to be with his destiny.

Now I might’ve forgotten to mention but the Count is actually somewhat of a vampire – not sure if he willed that part or if it was merely a side-effect. Nonetheless this grants him special powers, including but not limited to: shape-changing (bat/dog/wolfman/mist etc), brainwashing, fire-breathing and apparently flight.

Once in the UK all Drac wants to do is hook up with his laydee, but once his presence is made clear it seems that all the women he comes into contact with are more than willing to disrobe for him, often in public, while all the guys want to ram a stake through his heart and cut off his head.

(Coincidentally enough the same effect Matthew McConaughey has on the general public.)

The star of Dracula is the production design. The sets are opulent and immaculate with the finest detail being obvious and gothic themes and vivid creative imagery on display in almost every scene. The background is awash with vivid and lustrous colour and the costuming similarly intricate.

On top of this there are numerous eye-catching elements including the oft-parodied and copied mismatched shadows, the overlapping backgrounds which morph into other scenes or subtly show subliminal imagery, and the special effects for the time are quite impressive.

Gary Oldman fully vamps it up as the Count in his various incarnations, giving nothing less than 110% at all times in a role that demands cartoonish elements. Anthony Hopkins is no less over the top as Van Helsing, only perhaps in a role that doesn’t require the same degree of hamminess. But both Reeves and Ryder find ways to average out the film with their wooden performances and stilted delivery. I do not pretend to know a great deal about the nuances of acting or the techniques required to lend credibility to a period drama – I just know that whatever it is they didn’t have it.

Blood is a recurring motif in Dracula, for obvious reasons, and as the film progresses toward the inevitable much is shed, though in a Sleepy Hollow so violent that it can’t be real way.