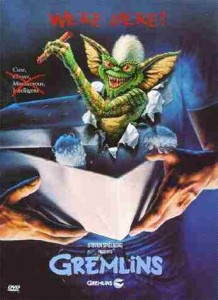 Gremlins came out at the right time. In another decade this low key flick could’ve sunk without trace even with the Spielberg name prominently associated.

But once people realised it wasn’t that scary and that it was pretty much all just harmless fun Gremlins took off, even inspiring a same-old sequel that I’ll get to soon.

A good natured inventor of ‘amazing machines that do not work’ stumbles across a bizarre, unique and yes; cute pint sized creature in an out of the way Chinatown curio shop. He promptly shills out a couple hundred bucks to the owner’s grandson and takes said creature home to the sleepy town of Kingston Falls for his son – who at 20 odd years of age should really be too old for pets, but that’s another story.

The son is named Billy (Zach Gilligan) and the creature is dubbed Gizmo, the pair bond almost immediately and it seems that aside from ‘the rules’ it appears that Gizmo is low maintenance and an ideal companion.

Aaaaah, but the Rules! 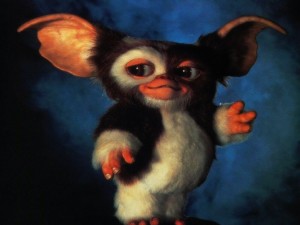 Gizmo is a Mogwai, a small fuzzy likable bundle of fur and wing-like ears that hums, gurgles and whistles pure happiness. He appears to be part-ewok with the facial structure of Yoda and the coat of a zu-zu pet. He can eat almost anything, is perfectly happy with only a TV for company and remains cute regardless of the situation.

But… he happens to be extremely susceptible to bright light (sunlight kills him), has no need for water and in fact the preference is that he steer well clear of it, and in a quite strange twist cannot eat after 12 PM (which leads to many ‘what about’ logic issues that are acknowledged in the sequel).

It turns out that being exposed to water makes Gizmo reproduce instantly, ping-pong sized fuzzballs that in mere seconds grow to full sized – which still means very small – Mogwais. Only these are a little different to the perpetually cheerful and innocent Gizmo. These ones have a mean streak.

Now as it makes no sense to explain three different rules and then not utilise them, that night our furry friends – sans Gizmo – manage to order some late night tucker. This results in a quickfire pupal stage in which they are cocooned in some slimy scaly glowing casings as they trans-Mogwai-fy, followed by a similarly swift re-birth where they emerge as slightly larger, almost hairless, infinitely less cute and more menacing Gremlins.

And at this point the film starts earning every bit of its PG rating. The Gremlins immediately set about making mischief, which starts as knocking things over and making a mess, and ends with multiple deaths. As the numbers grow quick the expanded numbers begin to wreak havoc on the formerly quiet little town, and the local residents wonder just what to do with this menace so close to Christmas (it’s nearly Christmas, I didn’t mention it because it has squat to do with the plot. Neither does the fact that Billy has a pair of pants that burn for his fellow bank employee Kate (Phoebe Cates), that also is a meaningless sub-plot that only means the two have someone to hold onto as they flee the Gremlins).

Nothing is taken seriously – nor should it be when you are dealing with a film involving small scaly mischief makers. Billy’s Mum has a memorable scene in which she dispatches a small group of Gremlins in her own kitchen, and a bar scene with a large group of Gremlins letting off steam is quite elaborate later in the film.

The characters are basically caricatures charged only with maintaining shocked expressions once the fun starts, although Billy’s Dad steals the show with his positive outlook in the face of his own failings as an inventor. There is also a bitchy local rich woman and a US proud paranoid xenophobe who blames everything on foreigners. 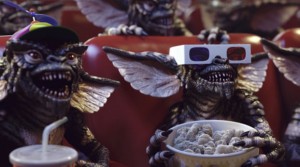 The reason though that the human cast are so bland is that any personality would detract from the real stars of the show: the Gremlins, who remain front and centre and tongue in cheek for the last hour of the film. There are dumb ones, sorta cute ones, slightly scary ones and one downright menacing one with a mo(gwai?)-hawk named Stripe who appears more dastardly than the rest.

The pace moves along with breakneck speed after the Gremlins are introduced and some of the Gremlin death scenes are perhaps a little OTT gross and gory (which reflects Director Joe Dante’s background in B movie horror).

All in all though Gremlins is but a good natured kiddie flick with some funny moments and a simple but effective premise, and even though it is now over 25 years old Gremlins remains as effective and as amusing as it was when I first saw it in the 80s.

The sequel on the other hand…

Final Rating – 7.5 / 10. Like night-club pick-ups in the wee hours of the morning, they start small, cute and fuzzy, and often end up big, ugly and scaly. Maybe they too shouldn’t eat after midnight. 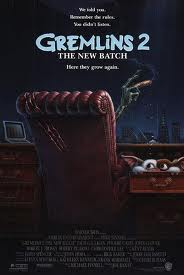 After Gremlins hit big in the cinema it was inevitable that a sequel would be forthcoming. The filmmakers obviously thought ‘if it ain’t broke don’t fix it’, and aside from a background change they practically made the same film over.

Billy and Kate have moved to NYC to work for a big Trump-styled multi-millionaire in his big Trump-styled state of the art office building. The boss’s name is Clamp – so I guess that the Trump thing isn’t much of a coincidence.

The early stages do precious little aside from telling us that New Yorkers are basically a pack of wankers who will brush aside anyone in their way, metaphorically and in some scenes literally.

In a bafflingly irrelevant plot development the old Chinatown store where Gizmo lived – both before and after the events of the first film – is taken over by Clamp Enterprises for a development (before never being spoken of again) Gizmo is found and sent to the science department in Clamp Enterprises so some tests can be run by wacky scientists.

Sure enough a few minutes later he gets wet and off we go again, with Billy and Kate as the familiar faces towering above the 2 foot spiky, scaled imps.

It seems that this time round any semblance of care was thrown out the window, it is more about how funny can we make the puppets look and act. Which sees the various Gremlins wear outfits, re-enact scenes from famous movies, perform musical numbers and die in bizarre and grotesque PG ways.

They have various mutations and hybrids and often act just like people! One of them even talks!!

In short all of the more ridiculous ideas that were no doubt thrown out from the first film are recycled and resurrected for use here.

There is much gratuitous product placement along the way and some equally gratuitous cameos, Hulk Hogan re-boots the film after Gremlin interference momentarily disrupts transmission, and film critic Leonard Maltin even gives a scathing review of the first film in one of the nudge-nudge TV spots within the film.

When it is this obvious that a sequel is made simply to ‘appease the fans’ *Cough-Cough*$CASH$* one shouldn’t expect a great deal of care, and such indulgences and laziness is to be expected. But don’t expect me to enjoy the supposed New Batch when it simply cannibalises any worthwhile idea from the original and pads out the remainder with unimaginative filler.

Final Rating – 6 / 10. A cash in sequel that was lazy even for a cash-in sequel. Might I suggest watching the first film twice?