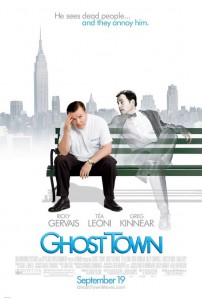 When Frank (Greg Kinnear) found out that his real estate agent had very nearly let his wife know about his mistress he thought he was having a bad day.

When Frank was nearly crushed in a freak incident involving an air conditioner falling from a 7th floor apartment he thought he was having a real bad day.

When Frank was flattened by a bus after stepping onto the road to avoid the afore-mentioned air conditioner… he knew he was having a bad day.

To Dentist Pincus – only ever Pincus –  (Ricky Gervais) on the other hand every day is a bad day, he is grumpy, arrogant, unsociable and sarcastic, not much of a people person.

When an incident during a supposedly minor surgery leaves Bertrand momentarily dead himself he takes the pessimist’s approach and thinks ‘typical’. When the same mishap leaves him able to see and converse with the unsatisfied dead (I know. Not many dead people are happy with their lot, these ones died without being able to make things right, and their spirit can’t leave until they do.) Once some of these ghosts realise one of the living can not only see them but help them, they approach him en masse The Sixth Sense style to ask for assistance with their own unfinished business. To paraphrase the tagline on the poster Bertrand Pinkus sees dead people… and they give him the shits.

Frank is the most persistent, he insists that Bertrand must break up his widow Gwen’s (Tea Leone) impending nuptials – don’t worry he’s not expected to ruffle the curtains and go “woooooooo” in a spooky voice. As Gwen luckily lives in his building Bertrand is able to arrange some ‘chance meetings’, but unfortunately during his previous existence he was inconsiderate to Gwen on more than a few occasions, and she is reticent to make small talk.

Eventually though he wrangles a dinner with the couple and finds that the new beau is practically perfect if a little uptight. A serious, intelligent, giving man with a compassionate world view, the only thing lacking (and how) is any sense of humour whatsoever. 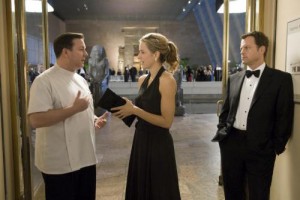 “There’s a GHOST right behind you… I’m serious!”

The more Pincus learns about Gwen though the more intrigued and sympathetic he becomes, and he starts wondering if she deserve happiness and contentment more than Frank deserves closure.

Leone is likable in her role as the straight person who is unaware of all the supernatural events going on around her and Kinnear is self righteous and a little smarmy as he demands a form of justice that he doesn’t deserve. But this is Gervais’ film, his Bertrand is unlikable even when he strives to remedy that, he doesn’t have a light bulb moment that forces him to change instantly but realises he is a prick from the start and simply likes it that way. He only gradually starts to evolve once he realises that perhaps there is something better for him. While Gervais hinted at this sort of ability in Extras I never really thought he was a guy who could actually act until Ghost town, now I believe he can do almost anything.

Ghost Town shares a key plot device with The Sixth Sense as I mentioned previously, the one guy with an unwanted gift who can communicate with the dead, who just want him to help. Even with that huge similarity this is where the comparisons end, and while Ghost Town is way more light hearted and perhaps flippant about Pincus’ ability there is a significant emotional heart to this film that belies the poster and the synopsis. In fact there is quite a lot of learning, growing and evolving going on for the duration of the film from all the leads, that isn’t meant to be a roadblock or a warning either – even though most of those things usually mean emotional cheese and male boredom – the quality of the actors and unexpectedly strong second half actually elevate Ghost Town beyond a mere light comedy and into the rarest commodity: a romantic comedy that is actually good enough for guys to watch and *GASP* maybe even enjoy.

Final Rating – 8 / 10. Manages to make an arrogant fat pom chatting up a widow at the behest of an adulterous ghost funnier and more touching than I could ever have envisioned.