Not Quite Hollywood (Review) 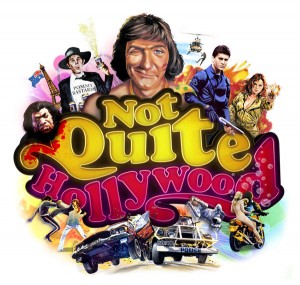 Subtitled – The Wild, Untold Story of Ozploitation, this is less a film than a sensationalised doco discussing the genesis of the Australian film industry. While it highlights an era that is hardly worthy of exalted praise, the people discussing the period are very well known and generally respected in their own right. How are these for names? Jamie Lee Curtis, Fred Schepsi, Barry Humphries, George Miller, Dennis Hopper, Jack Thomson and Quentin Tarantino, among others.

Now you might ask what would justify a doco on a period where some of the better known films include such “classics” as Howling 3, Razorback and Blood Moon, and it is a worthy query. I personally think that like the films that are featured so prominently in the documentary while they are not exactly necessary viewing the industry is where it is because of them. Similarly this documentary isn’t especially gripping but it is reasonable entertainment if only to see some of the shlock and rubbish that went on in order to bring some half baked ideas to the big screen.

Now when your average teen and early twenties audience are looking for exactly that, money can be made with these disposable ventures, and indeed it was. The fact is though that for every Mad Max or even The Howling 3 we are left with hundreds of films that were never heard of again, and for good reason. It is no longer shocking, but still interesting to see how racist, homophobic and sexist these early films were, foreigners only existed to be made fun of and actresses spent more time onscreen unclothed than clothed.

Also interesting is how female proportions have changed in 30 odd years, nowadays there might be three surgically unaltered actresses in Hollywood (I’m looking at you Keira Knightley), but in NQH there are almost a hundred partially and fully nude chicks, and not a surgery scar or Pam Anderson in the bunch. And to tell the truth a lot of them look better than the pumped-up, gym obsessed and silicon based Demi Moore and Jennifer Lopez clones all over the shop today, including Demi Moore and Jennifer Lopez themselves.

The middle section of the film focusses on the staple of low budget movie making, horror films. I for one love the horror genre but saw nothing here that made me want to chase up any of the titles on show for anything other than amusement value. The phrase “So bad it’s good” doesn’t really apply here.

What these filmmakers were chasing wasn’t critical acclaim, money or notoriety, but simply enough of a return to justify making another film. As VHS and Beta had yet to wage war on each other, these films were largely made with drive in cinemas in mind, and as Disney and Alby Mangels (google him kids) had the family market sewn up they soon realised with the youth market controversy sells. If a film had disclaimer that half way through if you were too scared you could leave and get a refund, teens would flock to test themselves. If word got out that a scene was either so disgusting that it was nearly banned, or so violent that it made people sick, Commodores and Falcons would be lined up honking at each other.

As an Australian it was curiously conforting to see just how many familiar faces there were in the excerpts of these films, 95% of which I had never seen. There were some interesting bits featuring American actors brought in to beef up budgets and cross promotion, only they were the cheapest actors going for the budgets available and were largely unsuccessful. There was also one well known Australian critic who obviously reviles the era and the films, Bob Ellis, he may get only a minute of face time in the whole film but drains every bit of joy in each negative and passionless quote that he spits in his dull monotone. I know docos must give both sides of the story a say but this guy is so negative that aside from drinking game value he brings nothing to proceedings.

I was perhaps a minute too young to watch most of these crappy films when they were first released, VHS wasn’t in vogue at the time, I was too young to drive and there was no way my parents were taking me to see “Blood Party 7 – Adrian’s Revenge”. I remember watching a review for Razorback on a current affairs style show when it was released, I can’t recall if the review was positive or negative, all I remember was that I was still inexperienced enough that the concept of being scared was in itself scary to me. This is why I never saw Howling 3, Blood Moon or Razorback, and once I was old enough and had seen enough horror to know what is and isn’t good, these films had faded from view and I never bothered chasing them.

I reckon that without Tarantino and the catchy “Ozploitation” hook, there was no way this was getting made. In fact, after watching Not Quite Hollywood if anything I went away happy not to have seen most of these flicks, as I saw precious little worth pursuing or discussing further. Let’s face it, when the only talking heads among the 15-20 that they lined up that seem excited discussing these films (rather than just being matter of fact) are the Saw-franchise geeks and Quentin Tarantino, you should know the target market, as Tarantino will talk up almost anything crappy and low budget, and one of the Saw guys used to review dodgy films for teen TV.

Oh,. and the final 3 or 4 minutes basically act as a flimsy excuse to plug “Rogue” the Aussie croc film that I recently reviewed here.

Final Rating – 6.5 / 10. Like the era itself, this is probably only necessary viewing for film buffs but I don’t feel better for having experienced it. Watch Rogue instead, (and that’s only faint praise).