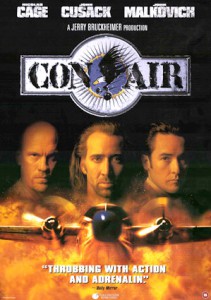 Hold onto your mullets.

Like Face / Off, Con Air works best when you don’t think too hard about what you are watching, though it must be said that the first 2/3 of the film are pretty good – if formulaic.

Nic Cage is returned serviceman Cameron Poe, home to see his pregnant wife who works as a waitress, after a spell away – the fact that his wife is pregnant means he was either stationed for far less than 9 months (she wasn‘t even “showing” upon his return) or that perhaps he might have cause to wonder how she picks up her tips…

In any case on the first night some local hicks poke fun at Poe, then confront him in the car park where a fight breaks out. In dispatching his three assailants Poe accidentally kills one of them, leading to a trial and a sentence of 7 – 10 years. Poe ends up serving 8 years and is due for parole. While behind bars he wiles away the time improving himself, working out, writing hokey letters to wife and daughter and growing a bad-ass redneck mullet – according to the montage we are shown anyway.

If that wasn’t “Awww shucks” enough his day of release coincides with his daughter’s birthday, and seeing Poe didn’t want his daughter to see him in a cage this will be their first meeting.

Don’t worry I’m sure there will be absolutely no hiccups.

Poe is scheduled to board a plane that will take him home to be released, only it happens to also be transporting some of the most seriously deranged and violent criminals to a newly created facility to house “the worst of the worst”. This gives Vince Larkin (John Cusack) good reason to list the various body counts and worst aspects of the inmates, who have names like Diamond Dog (Ving Rhames), Pinball (Dave Chappelle), Johnny 23 (Danny Trejo) and Cyrus “the Virus” (John Malkovich).

As a special matter a Drug Enforcement Agency operative will be boarding undercover as a prisoner to try to uncover information from one of the inmates – this is at the behest of the DEA boss Molloy (Colm Meaney), though in reality Molloy’s character only exists to provide friction between he and Larkin, and to make bad decisions to allow Larkin to fix them in heroic fashion.

Once aboard it takes all of 14 seconds for the locked up criminals to undo months of prevention and security planning and take over the plane. The only thing between them and freedom is a routine stop to drop off and pick up more inmates (including meek looking mass-murderer Garland Green who gets the full Hannibal Lector treatment) if all goes according to plan they are then on the way to freedom.

This stop necessitates the drop of some inmates. Now the ideal scenario would see Poe volunteer to leave the plane, thus removing himself from the situation so he can make his release in time and see his family, but… Because Poe isn’t really a criminal – after all he only killed one little guy with his bare hands! – and as his buddy on the plane is diabetic and there is a female guard (Rachel Ticotin) that he worries about, he chooses to stay aboard.

To this point the film was only very far-fetched, now however the fun starts and the film loses whatever fragile grip on reality that it previously enjoyed, devolving into a mess of plot-holes and one “REALLY?” moment after another.

Shortly after the plane once again takes off the good guys on the ground realise that they are no longer in control of matters. Might I point out though that no-one seems to have a radar to see the plane, they only follow the transponder that was once in the plane – seeing as how satellites can now read the numbers on our mailboxes from space I feel that their inability to locate the real plane was baffling. (I know this was over a decade ago but I know they had pretty good radar equipment even back then!)

Anyway in between the gun battles, explosions and macho talk that includes some gems as:

John Malkovich lends credibility and genuine menace as Cyrus the Virus and John Cusack tries in vain to make the Larkin character work as the voice of reason, though if you consider most of his arguments with Molloy and his own boss his suggestions and protests are often plain wrong.

There is a creepy “Well did he?” subplot involving a young girl which seemed unnecessary in a mindless shoot ‘em up and the longer the movie goes the more ludicrous and laughable it all becomes.

Final Rating – 6.5 / 10. Another “don’t think” film, if you just enjoy the pretty explosions then Con Air has a couple moments, not enough to suggest that you seek it out unless you want a good movie for a drinking game.