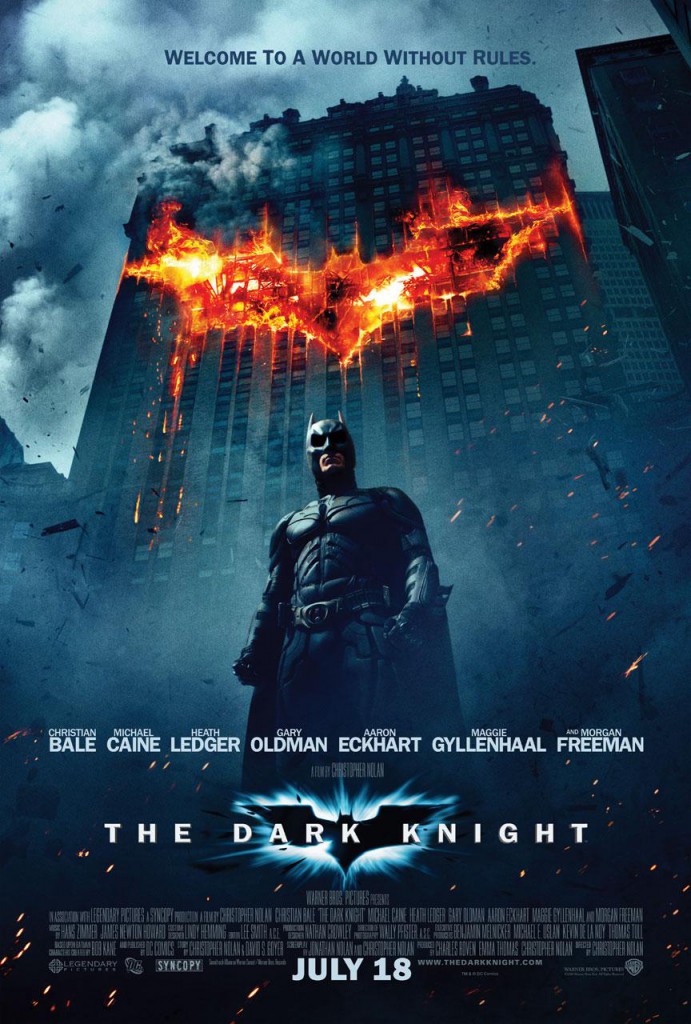 Even the poster is rockin’.

I wonder what would have happened if The Dark Knight was released and THEN Heath Ledger passed away in the months after?

I have no doubt at all that the film would have been a massive box office success and that Ledger’s performance would have been widely and justifiably lauded… But an Oscar??? Not sure about that one.

The Dark Knight is quite simply brilliant. A tribute to the meticulous and painstaking work put in by Christopher Nolan to elevate the film well beyond the “Best comic book adaptation of all time?” argument and into the “Best film of the last decade (or more)?” discussion.

I really think it’s that good. (A 2 ½ hour film about a rich and privileged white guy who dresses up as a bat better be good.) 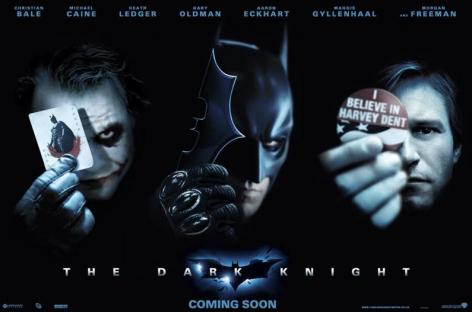 Don’t normally do two posters but this one is too cool.

The film opens with a professional team of bank robbers performing a well plotted and exactly executed heist on a large Gotham City bank – only one profits from the venture. Not only is it an excellent opening to any film, it also introduces us to the Joker while simultaneously providing a window into his thought processes and vicious nature.

Meanwhile. In Gotham City (also). After the success of Batman in foiling the nerve gas attack on Gotham fake Bat-wannabes have sprung up left and right seeking to dispense their own form of vigilante justice, only without the equipment, training and common sense many of them end up dead (I couldn’t come up with a “bat-tered” or Flat-man” pun that didn’t suck. Curse my inadequacy!)

The usual suspects staff the good guy brigade, Alfred (Michael Caine) is still butler-ing it up, Lucious Fox (Morgan Freeman) is still running Wayne Enterprises and Gordon (Gary Oldman) is working his way up the ranks of the police force. 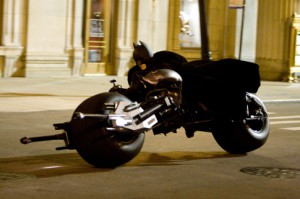 Of course Bruce Wayne (Christian Bale) is running double duties as millionaire playboy / masked protector of the innocent, though this time around he has a few new toys and the suit has seen some improvements. The Batcave itself is gone, replaced by a cool new secret underground base to hole out in while the Wayne Manor is being rebuilt from scratch. (Not sure how he managed to build a massive underground bunker in plain sight undetected but that’s probably only on a “need to know” basis.) 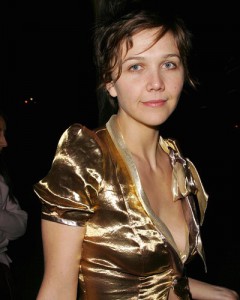 Looks like Nolan finally agreed with the consensus that Katie Holmes can’t act and is bland as a dishrag and replaced her with possibly the only woman less interesting in Hollywood wit a face like a gargoyle – Dent is handsome, brave, in corruptible, principled and honest *SIGH*, a real upstanding citizen and a man to be trusted. Put more bluntly, one of the couple loses half a face and is horribly disfigured and he’d still be the looker.

Now the actual plot thickens when the Joker goes to visit Gotham’s primary underworld figures – who thankfully and conveniently happen to all be in the same room at once, you save shoe leather that way – to give them a proposal. As Batman and the Gotham police have largely swept the streets clean of scum the Joker claims that he will restore disorder to proceedings by killing Batman, so that the thugs and mob bosses can once again rule.

The subsequent events see BatBruce heading off to Hong Kong, with the upshot of it all being EVERY major criminal in Gotham City being plonked in jail at the same time, aside from the Joker. This leaves the streets clean for a square off that allows the forces of good and evil to go “Batto a Joko” for the ultimate prize, that of runnin’ thangs. 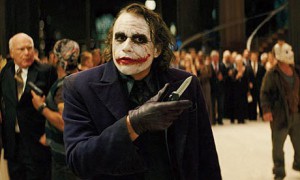 The face that sold a million T shirts (to emo kids).

The Joker then starts trying to move things along by picking off city officials one by one, he gives each target notice too just so they can get their affairs in order, building a sense of dread nicely within the ranks of Gothamites. It seems the Joker is not a criminal for any known reason, he isn’t trying to make a buck by doing what he does, he simply desires, and thrives on chaos.

As the panic in Gotham builds the Joker reveals his ultimate aim – to get Batman to unmask himself, presumably so he can get a clear potshot at him and re-humanise him so he is no longer such a powerful symbol of good. Unfortunately to make this aim clear The Dark Knight slows down just a tad to get all the ducks in a row. A minor inconvenience that might have been avoided with cutting 20 minutes of the film, but the silver lining to this is that once things get moving again the film is non-stop helter skelter until the credits.

The Joker presents BatBruce with a conundrum, an unenviable choice that must leave one important loser, as a result of all this Two Face is “born”, and shortly after Gotham’s citizens are once again faced with an ethical dilemma that leaves many lives in their own shaky hands…

The Dark Knight neatly walks the line between adventurous and commercial without selling out, it really is storytelling at its best and benefits from the large number of well crafted characters that already inhabit the Bat-Universe. The fact that it doesn’t compromise along the way and maintains both vision and integrity is simply an incredible achievement.

The cast aside from Gyllenhall (who looks like a guppy) are all solid, obviously Ledger created a great villain and deserves his plaudits, but Eckhart too neatly handles his character’s challenges and transitions more than capcably – he even makes it look like he thinks Rachel is hot!

With every good Vs evil film, the success or failure lies with the effectiveness of the duelling parties. Batman neatly embodies all that is good and fair, and The Joker brings chaos and uncertainty to the table. It is also worthy of note that most major characters in the film have their beliefs tested at some point or other as they are inextricably swept up into the action and events that surround them.

At a butt-numbing 150 minutes The Dark Knight is not the film that you start late at night before bed, it deserves your full attention, but if you are willing to give it the 2 ½ hours that you would ordinarily spend watching American Idol or Backyard Renovations Series 7 you will be well rewarded.

Final Rating – 9.5 / 10. Lose that flat 15 – 20 minutes and this is unbeatable. As it is it can settle for All Time status without reservation. Aside from having a little more violence than Batman Begins I can honestly say this film should please almost everyone.