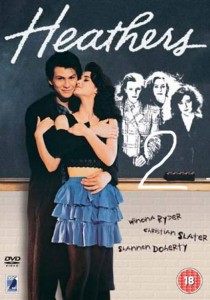 You wouldn’t be so smug if you saw the future Mr Slater.

In fact the general tone swings wildly between ‘all teens are poor, downtrodden and misunderstood’ and ‘teens are gormless idiots and lemmings’ that it almost makes perfect sense that it nearly ends the way it does. Which is to say a way that I can’t describe.

In a fictional US High School the ‘hallway elite’ all happen to have the same name – or at least three of them do – the non-Heather is known as Veronica (Winona Ryder).

Despite this obvious handicap Veronica manages to remain popular among the petty and privileged, and with the Heathers X3 has the run of the school. (They also talk in such a way that I would bet real $ that the writer of Juno watched this incessantly in her youth.)

The foursome find that eligible bachelors become their playthings, that the pathetic and unworthy ‘normals’ admire them and aim to emulate their every move and gesture, and the disgusting nerds, wallflowers and *GASP* non-conformists might as well live in an alternate universe.

Then V-Ron meets JD (Christian Slater), a handsome loner who plays by his own rules *SWOON*, and with the startling realisation of her own sell-out-ism abruptly decides that she know longer buys into the ‘scene’.

A couple of self-conscious chats later and a quick roll on the croquet lawn and the new couple decide if you can no longer join ‘em, might as well kill ‘em.

But murderers are just like zombies and lovers of Pringles, they just can’t stop at one. And even though the evidence of the first killing is solved with a forged suicide note JD in particular can’t leave well enough alone…

The film then alternates between skewering the cult of popularity by suggesting that suicide suddenly becomes cool and almost the in thing to do. Teens dumb right? But wait; then it shows the adult response which is a knee jerk reaction that it’s just a phase, as long as we get most to adult-hood we can be content. Adults dumb right?

Meanwhile; JD spouts some ideas and viewpoints that are so very insane and ultra-illegal that no-one could possibly go along with him. But oh his hair! (And ultimately Winona is a shoplifter – not a killer right?)

I was genuinely disturbed by the role reversal conversations between JD and his Dad and found the intricately scripted yet still inane chatter between the Heathers +1 aggravating beyond belief, which I guess was the point.

While the film actually does handle some real issues including bulimia, fitting in, young love and of course suicide, but with all the flip-flopping there is no distinct message or moral to be found. In the end it seemed like the film was a teen itself, argumentative, impatient and full of self loathing and self importance at the same time.

I just wish that it would choose a side.

Final Rating – 6 / 10. The obvious 80s companion piece to Pump up the Volume, Heathers is prettier, wittier and somehow subtler, but I personally think not nearly as entertaining (or as clever as it thinks it is).