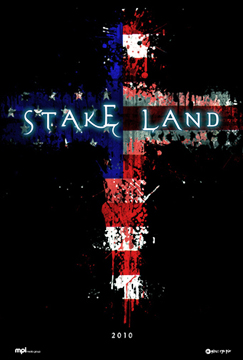 Take some of the core elements of Zombieland, add a pinch of The Book of Eli and set it all against a backdrop strongly resembling Zombieland (again), only with a tone more in line with The Road, and you’ve got Stake Land, a film that would have been hands down the best horror movie I’ve seen in years if it weren’t for a 2 minute period of over the top histrionics near the end.

The early scenes resemble Zombieland the strongest, all the way to the slightly unwieldy title. After an effective opening sequence in which young Martin finds himself suddenly and violently orphaned, only to be saved by wizened vampire hunter Mister, we are told that the globe has suffered an outbreak that has rendered many people bloodthirsty vampires. These aren’t your sparkly pretty shirtless fuckers either, nor are they the karate kicking dudes from Blade, vampires in Stake Land are mindless killing machines, easily identified but hard to kill.

Mister is one hard as nails individual, he acts swiftly and frequently solves problems with violence, he recognises that he can’t leave the 16 year old boy alone and allows him to tag along. Over time Martin becomes his apprentice, learning the ways of the vampire hunter as they move through some harsh inhospitable territory surrounded by much peril.

The given this new vampire outbreak it appears that the United States is once again in disarray, with food at a premium and lawlessness reigning it has become every man for himself. Some small pockets have retained their sanity and provide momentary safe haven along the journey, a place to have a good night’s sleep, and to trade for food and drink – vampire fangs have particular currency. But outside these zones things become a little more iffy, some areas are beset by vampires, of which there are various sub-species, other areas are run by militia groups, some by a band of religious zealots called the Brotherhood and it is rumoured that cannibals prey on stragglers along their route.

It is decided that the duo will head North to an area known as New Eden which apparently is a safe zone in an amusement park – wait that’s Z-Land again. Along the journey they come into contact with all of the genres of inhabitants, having most difficulty with the religious zealots after Mister happens to kill a couple of their number in defense of a woman. They have various traveling companions, the afore-mentioned woman is a nun but there is also a pregnant teen and an ex-soldier, and the crew sticks together and works as a unit in order to survive.

There is no snappy banter, no Bill Murray cameos and no carefully staged action sequences. With so many undead things and people willing to do you harm there is precious little rest or time for relaxation, and the reality is on the rare occasions when the party allows themselves to ease up momentarily they are often closer to danger than they think.

Mister uses no flourish and flash with dispatching the vampires when they do come across them. In fact killing a vampire looks a lot like putting down a drunk of immense strength, they take an awful lot of hits and if you aren’t careful they can knock you into next week, but if you watch yourself and utilise your quickness and numerical superiority they can be defeated.

Stake Land is one poorly conceived scene away from being excellent, but it has been a long while since I saw a gritty horror film this well conceived and executed. I was extremely satisfied to see some honest to goodness nasty, blood drinking vampires for the first time in a long time, and they were used well here as simply another danger in a land full of threats. Mister (Nick Damici) was a great character, jaded, withdrawn but loyal and protective of his crew, and Martin (Connor Paolo) doesn’t have snappy dialogue, doesn’t evolve into a master vampire killer overnight, and even at the conclusion of the film is still a 16 year old boy, just one who has seen some freaky stuff that you wouldn’t believe.

I can’t say Stake Land is a happy film, though it isn’t quite as bleak as The Road, but a lack of action and quips and the severity of the tone might prevent it from finding the audience that it deserves. But in my opinion if you are a true horror buff then this should be right up your alley, and I for one will be pleased to spread the word about Stake Land to true horror fans, not ones who put up with the increasingly shitty commercial output that we have been forced to endure.

Final Rating – 8 / 10. I haven’t wrestled with a score so much for a long while, I gave an 8 but it may really be a 7.5. In the end I gave the extra 0.5 for reminding us that horror doesn’t need to be showy or end on a high. In any case Stake Land is the most admirable effort in genuine horror that I have seen in a long while.