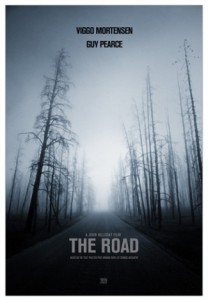 Normally I find it hard to recommend that someone watch films that I find legitimately depressing. Why would I suggest that someone go out of their way to make themselves sad?

Normally films that have the greater impact are realistic films, the first scene in Saving Private Ryan, Hotel Rwanda or Schindler’s List, because you know that these events happened and that real people were killed in horrible and ultimately unnecessary ways.

The Road is different, it deals with a possible but by no means likely future, but it handles the material in such a serious manner and with a firm grip on maintaining the appearance of realism that it still has impact.

Far more than I would have thought possible after I realized where it was headed after the first few minutes.

In this case the globe has been largely stripped of any life giving assets, plants, trees and wildlife are virtually extinct, water is tainted and basically food sources have been exhausted.

We meet the two main characters huddled together yet exposed to the elements, they are never named as anything other than Father and Son/Boy, and we learn in flashback why they are Father and Boy, and not Father, Mother and Boy.

Father (Viggo Mortenson) is weathered and worn, both by the environment and the burden of being solely responsible for the survival and wellbeing of the Boy, who I am guessing is 10 or 11.

In this post-apocalyptic world Father has decided to head to the coast to see if things are better there, and as they can ultimately trust no-one they are always on the move and wary of anyone they come across, which doesn’t occur often in any case.

Father and Boy are “The Good Guys”, meaning that as well as looking after each other they also don’t eat others…

Now might be a good time to mention that when people run out of food and are starving to death, it is perhaps inevitable that they will seek alternatives, and in this potential future it appears that even cockroaches didn’t make it though, so other people are apparently back on the menu.

So being cold, wet, hungry and miserable, cold, wet hungry, miserable and on the menu is another altogether. No wonder they don’t seek the companionship of others.

What set The Road apart from say The Book of Eli or other visions of a bleak future, is that there are no fabulous stunts or creatively gory or spectacular kills here, nor is there a principal threat who stalks Father and Boy through the film. Where possible the duo shy away from all other contact, they run when it is relevant or even if they are unsure and basically they act as you would think you would if you were ever in their tattered shoes.

There is really only one notable scene in the movie that stands out from others, and even that is not played up as being any more than another situation that they must remove themselves from.

At one point in the film Father and Boy find respite and sustenence, they indulge themselves as best they can, with baths and a haircut. But we know this cannot last and it is not too long before they are once again pushing forward to an unknown destiny.

There are bit characters that enter and leave the story with equal pace, there only because that is what would happen in this time. These include an almost unrecognizable Guy Pearce and an equally disheveled and decrepit, thankfully none of these scenes are played to have any more impact or importance than others. As with everything else that occurs along the way these are simply things that happen while they concentrate on surviving.

This is the kind of movie that even when things go well for the pair we know that it will be brief, in such a harsh environment nobody actually wins anyway, there is only temporary respite from unrelenting danger.

It is unfortunately true that sometimes not everything happens for a reason, random events and people transpire to prevent you from reaching your goals, even if they do not plan to. This is the saddest movie I’ve seen in years, it moves inevitably towards an unknown end, but one which seems destined for even more pain and loss.

Final Rating – 7.5 / 10. Has more impact than 99% of other movies that I have seen for a while. Quite a depressing film, but one worth watching. (Warning: If you have a kid you might even squeeze out a tear or two.)