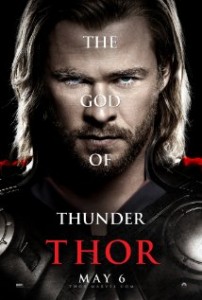 Thor has a genetic advantage over many other superheroes. He wasn’t bitten by a ‘carrier’, exposed to radiation or bitten by a radioactive spider (whew they went the full combo on that one!), Thor is a God.

Not THE God, just A God. In this case the son of Odin and a resident of the distant citadel of Asgard, who it turns out saved Earth a millennia or so ago, slapped their hands together and said ‘well our work is done’, and buggered off into space to watch our progress from afar, taking all the miscellaneous Gods with them to build a floating city strongly reminiscent of the space sequences in Watchmen, only with a distinct hint of Flash Gordon thrown in for good measure.

We meet Thor and brother Loki as children, in a scene which seems to set up a lengthy (and usually tedious) ‘sibling rivalry through the years’ montage. Thankfully though any thought of a long drawn out yawn fest is immediately cut short as we cut straight to a ceremony with proud Dad Odin (Anthony Hopkins) bestowing the King’s crown to the cocksure and arrogant Thor (Chris Hemsworth) with thousands of citizens bearing witness, including grown up (pasty) Loki. Only the coronation is cut short by an incursion by the sworn enemy of the Gods – the Frost Giants – who as the name suggests are basically tall, cold guys who unfortunately all look exactly alike.

Despite the rude interruption Odin decides not to seek retribution by following the Frost Giants to their icy abode… but Thor and his *ahem* Fellowship of mighty warriors of disparate origin, weapons and abilities second guess their orders and rush in blindly, putting Asgard on the brink of war.

And with this one poor decision, Odin decides that he has no alternative but to cast his own Son from paradise down to Earth, which sort of suggests that Earth must be a shithole to them if you think about it.

On Earth Thor is merely a tall hugely muscled man with lustrous locks of blond hair, though still surly and aggressive. Now a mortal, gone are his superpowers and his mighty hammer, which was also cast to Earth separately.

Thor immediately runs into Team Science, Jane (Natalie Portman), Eric (Stellan Skarsgaard) and sarcastic comic relief Darcy (Kat Dennings), though it would be more accurate to say they run into him – twice. Team Science have been researching phenomena that… well I don’t really know it was never explicitly stated – but suffice to say they find a huge man who arrived in a massive surge of energy quite interesting, Jane particularly seems to like the cut of his jib, what with all of the muscles and golden locks and such.

The remainder of the film has Thor fanging around being obviously out of place desperately trying to regain his ‘super’, starting with his hammer which the government has already tracked down and are guarding zealously, and Team Science (never really called that but they should’ve) providing a taxi service for his travels, a sounding board for his thoughts, and Jane an inspiration for his loins…

And all the while all is not running smoothly on Asgard.

The movie suffers with the need to switch back and forth between the Asgard-in-space setting and Earth, with neither realm getting to host any scenes of great significance, and it warrants mention that for 90% of this superhero movie Thor is mortal and therefore decidedly non-super. Jeremy Renner and Rene Russo have blink and you’ll miss them roles, Renner’s being particularly baffling unless he is to pop up again in The Avengers or is such a Thor fan that he was willing to take any role just to be in the film. The Fellowship members are all quite forgettable and essentially rendered wallflowers for much of the film, and Anthony Hopkins as Odin has little to do aside from remain dignified and paternal throughout, though he does get the chance to challenge Morgan Freeman for the ‘guy with the most voiceovers’ crown.

Despite its flaws Thor is shiny and well made; it skips any real violence and there is no sex and profanity, obviously catering to the PG crowd. While that often results in bigger box office from the ‘just happy to be at the movies’ teens it normally spells doom for any real entertainment value. But while Thor lacks the edge to elevate it above merely worthwhile this is one notable exception where PG can still mean Pretty Good.

Final Rating – 7 / 10. Without the violence of Blade 2 or the charisma of Iron Man/Tony Stark Thor was never really going to challenge for the All-Time comic book movie title, but even though for most of the movie neither Thor nor his film are super, you won’t be thorry you thaw Thor.

P.S. I am so digging the post-credits Nick Fury (Sam L Jax) teases. If they manage to fit all the main characters in and weave the storylines effectively The Avengers could totally laugh derisively in the face of the X-Men films and their tacky powers.