I Saw the Devil (Review) 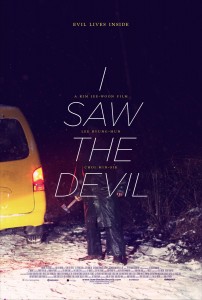 I Saw the Devil is an extreme film. Probably not as ‘extreme’ as crap like The Human Centipede or A Serbian Tale, but it is doubtless a film streets ahead of both because it is all vaguely plausible.

A serial killer is operating in remote areas of South Korea. He is vile, thorough and entirely cold-blooded. Seemingly driven to degrade, humiliate and abuse his victims, he is a repugnant, disgusting machine purpose built to inflict pain and suffering.

Kyung-Chul preys upon women of various ages, and once they are in his clutches he calmly explains to them what is going to happen, because once they get that far they don’t get away… 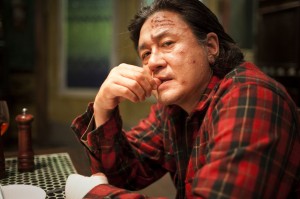 This detestable piece of work is named Kyung-Chul, he is played by Choi Min Sik of Oldboy renown.

(This is not a John Doe from Se7en revealing spoiler, we are introduced to Kyung-Chul within minutes and he is never far from the screen throughout the film.)

The reason we follow him at all is that on this occasion he has chosen a victim whose death brings repurcussions. To paraphrase the ‘Who shot Mr Burns?’ episode of The Simpsons “Dozens of people are shot every day in Springfield, until now none of them was important.”

So when Special Agent Soo-Hyun (Byung-Hun Lee) and the Police search party find enough evidence to realise that his pretty, pregnant wife is the latest victim of Kyung-Chul, Soo-Hyun shelves all other plans and decides he will find this man and seek his vengeance.
As if having one highly trained, extremely pissed relative wasn’t enough, Soo-Hyun’s father in law is the ex-Police Chief. He immediately green-lights Soo-Hyun’s plan of retribution and Soo-Hyun takes a list of four potential suspects and gets to work.

Now with time of the essence and the rage at boiling point, Soo-Hyun ignores your ‘standard procedure’, heading straight to torture and other brutal intimidation tactics. Not surprisingly these work pretty well, and he ploughs through the first couple of names on the list. The third is more difficult to track – it is in fact Kyung-Chul, but once located the fun really starts…

Soo-Hyun decides that merely killing his wife’s tormentor is hardly sufficient. Upon locating Kyung-Chul he sets about providing his own systematic brand of incremental torture. He beats Kyung-Chul senseless, only to repeatedly spare him the finishing blow, at which point he releases him once again from his clutches.

Kyung-Chul is understandably perturbed by this turn of events, and openly wonders just how Soo-Hyun manages to continually be one step behind him as he attempts to elude his pursuer. Worse still it seems that Soo-Hyun has no quick fix in mind, he wants to keep his intricate and prolonged revenge on his terms, and a deadly ‘catch and release’ game ensues.

The film is exceptionally violent – definitely not for the easily squeamed – but the two leads make it work. Soo-Hyun and Kyung-Chul inflict massive punishment upon each other, with each having the upper hand at various points and with the stakes steadily rising. Choi Min Sik has made a career of playing roles on the edge of reality and he is most definitely called upon to do that here, his Kyung-Chul is a man repugnant enough for the ages, not only does he eventually realise why his assailant is haunting his every move, he relishes the challenge, and being defeated at his own game is apparently worse than his own death.

Byung-Hun Lee is also believable in a role that starts out as slightly more straightforward, but delves into darker territory when it appears that Soo-Hyun is perhaps getting a little too happy with his work.

Before I watched I Saw the Devil all I knew was that it was a serial killer movie and had a lot of high-end violence, which leaves endless possibilities.

I Saw the Devil is indeed violent, it is indeed unnerving at times and may test your moral compass. It is not the most striking film that I have seen this year, nor anywhere near the best. That leaves it in the unenviable position of being worth watching, but not much more than that.

I can recommend I Saw the Devil as a quality film, but I can’t say that it will change your life or make your jaw drop like others have claimed. It is powerful at times but a little silly in others, and if you believe the events here apparently about one guy in seven in South Korea is a serial killer. That might be more disturbing to me than the rest of the events.

I wonder how the English language remake will turn out in a couple years?

Final Rating – 7 / 10. Another original piece of work from South Korea. I saw the Devil might not wow you, but it might give you something different to talk about at work next week.

P.S. Don’t say I didn’t warn you about the violence: the Achilles scene alone made me squirm more than a dozen Saws could.