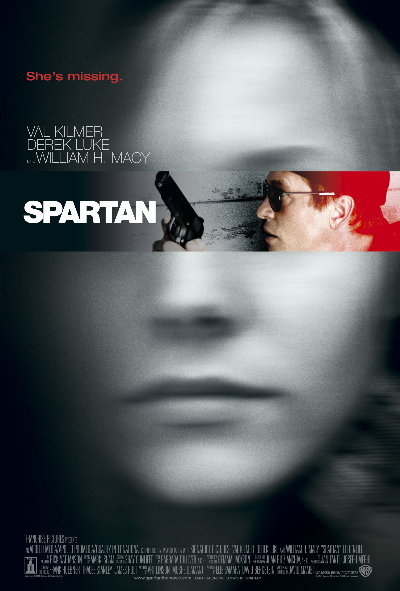 Unlike most releases these days where practically every plot point and character detail is either discovered or purposefully leaked to the press to build buzz (do we really need to know who the cameo in The Hangover 2 is 6 months before the film is released?) the viewer is given nothing in this film – even after it starts rolling.

So I will try to keep this in mind and keep exposition to a minimum, sticking only with what the 50 odd word blurb on the DVD reverse tells me.

Thankfully the cover lists the primary character name, in the film we don’t learn Robert Scott’s name for a looong time – but I need to call him something so Scott will be the go.

We meet Scott (Val Kilmer) as he oversees a hardcore brutal course that sifts out the Secret Service wheat from the chaff. While having not much to do with the core plot it shows us a lot about Scott, who is efficiency in motion.

There is not a moment, thought or emotion wasted in anything that he does, Scott is all business all the time and is a purpose-built machine ready for anything at any time, equipped with a myriad of skills and driven by duty and relentless logic.

Scott is the ‘Guy they call on when something needs fixing or doing’, something that no-one else is willing or capable of doing. As he says at one point in the story he “Obeys orders, he doesn’t give them”.

On the way home from the course Scott is headed off at the pass and told he is needed. Without a moment’s hesitation or a question of why or what he grabs his scant belongings and boards the helicopter to Boston…

The case with which Scott is merely a part of is BIG and IMPORTANT. It necessitates a large scale operation with members of various acronym laden departments (CIA, FBI etc).

Again nothing is explicitly stated by any character so if you snooze you lose valuable knowledge and could perhaps get a little lost (this is not the film to walk away to grab chips and coke for a few minutes).

The trail covers a lot of territory, some information is sourced in Boston but the plot eventually moves to another country altogether.

The script plays no favourites with characters, as soon as you think that this guy or that gal will be along for the ride they vanish – sometimes forcefully, some return later, others can’t – people die, no-one knows kung-fu or pretend killing techniques, there are no clever robots,  and no elaborate traps or huge explosions.

Along the way there are dead ends, conspiracies and unexpected turns of events, and not everyone is an ally…

The film’s poster simply says “She is Missing”, we eventually learn who She is and details about the hows and the why’s but that means little to Scott, who simply states “I am here to get the girl back (Sir), and there is NOTHING that I will not do to get the girl back”.

I’ve seen Spartan perhaps 5 times now, I know exactly where things are headed but the pleasure is getting there, I am by no means a Val Kilmer fan but he puts some credits in the bank with his performance as Scott, although the entire cast is excellent from Kilmer down to the various minor roles. I love a good mindless shoot ‘em up with obvious set pieces, throwaway quips and pointless violence as much – perhaps more – than anyone. But occasionally I love being tested by a film that demands attention and is more than willing to leave viewers behind if you don’t or if you can’t keep up. Spartan is such a film. I can’t say Spartan is all that under-rated, it has a Fresh rating on Rotten Tomatoes and is a +6.5 on the imdb, but I will say it is woeful under-recognised in that hardly anyone I know has seen it.

Final Rating – 8.5 / 10. Crackling dialogue, a complicated yet plausible plot and a terrific cast make Spartan an action drama worth searching out.