The Girl Who Kicked the Hornet’s Nest 2010 (Review) 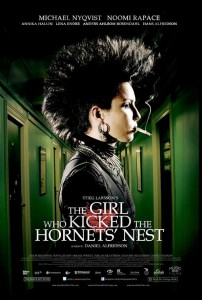 Smoking won’t get you a man. Oh. That’s fine then, light up.

I looked over the weekend at release dates for upcoming films, this film had “late 2011”.

Putting my inner Lisbeth Salander to use I thought how I might shortcut proceedings and get my film sooner.

And now Ebay International presents: The Girl who Kicked the Hornet’s Nest!

Right this film gives no concessions for those that are not up to speed with the story, I will be a little more kind by referring you here and here.

But now on with the story. The Girl Who Kicked the Hornet’s Nest deals with the repercussions of the events of the second film. It is in fact almost a courtroom drama.

The film opens with the battered and dazed combatants from The Girl Who Played with Fire coming to.

Lisbeth Salander (I’ve spent enough time describing her) is in hospital with major gunshot wounds. Her father is in the same school but in a little better shape, and his son/her half-brother Neidermann is on the run and out in the open, I’ve mentioned him before but the quick version explains he is closer to 7 feet than 6 and has no pain receptors.

Neidermann supplies most of the action and violence over the next two and a half hours.

Like many closing films the main problem that this film faces is neatly wrapping up all the relevant issues and problems that the first two films created. There is a good hour + spent aligning everything so that the finale would put the story to bed.

The police have Lisbeth in custody and want to try her for the attempted murder of her Dad.

The Dad meanwhile wants Lisbeth DEAD – like now – and demands that his nefarious colleagues embroiled in his former illegal activities make this so.

Neidermann kills his way across country to home – we guess he must have plans of his own as he never speaks.

Mikael Blomkvist, his missus and editor Erika and paper Millennium seek to rush an issue that unveils the whole intricate cover-up and clear Lisbeth’s name once and for all. Lisbeth helps where she can by eliciting the services of fellow master hacker Plague to do what he does.

Lisbeth is coming from a near death experience and is training body to function somewhere near capacity and regain her strength and agility (think Linda Hamilton in the T2 mental hospital for an idea). A doctor initially helps shield her from prying eyes and probing questions from lawyers and police.

It seems that the prosecution have sought the advice and expert assistance of a psychiatrist who treated Lisbeth in her youth, his name is Teleborian and he is a greasy streak of smarm and smugness. Lisbeth refuses to either speak to or acknowledge his existence in early treatment, knowing full well that he is part of the “they” that would see her take a big fall.

Meanwhile “they” also want to put a stop to the Millennium issue and the unwelcome publicity it would bring, putting much pressure on Mikael and Erika and causing them to second guess if it is all worth it.

I’ll leave proceedings there but the poster gives me enough confidence to tell you that Lisbeth goes full bore punk bird of paradise for the trial. 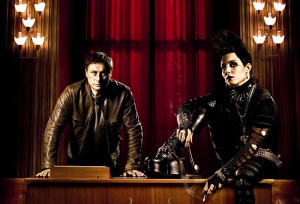 “I said dress fancy, not… ah forget it you look great Mikael.”

As Lisbeth spends a good 100 minutes recovering from her injuries and a further hour in court during the film she has little chance to display her skillz, not even her hacking abilities or photographic memory. She remains 100% bid-ness at all times though and 100% determined to maintain her independence, barely acknowledging the efforts of Plague, Mikael and her lawyer.

But while the prospect of say Rambo 3 dealing with the multiple court martials and hearings related to the genocide he perpetrated might not sound that must-see, Lisbeth is a far more rounded character, so her not getting the chance to unleash isn’t a major disappointment.

It is still a shame that the script didn’t allow her with a little time to express her anger and pent up rage more personally. After all the shit she went through surely she earned that right?

Given the 6 hours that precede the finale it is somewhat of a relief to see that everyone gets whatever is coming to them – even though this film packs less of the punch that the first two films had.

I would be hard pressed to label any of the three films in what is apparently called the Millennium trilogy a classic or even great. But here is the case of the whole being far more than simply the sum of its parts.

The Millennium trilogy is an immensely entertaining and rewarding set of films, well written, well acted and well made – but more than that Lisbeth Salander is a towering and compelling character that I would love to see again and again. Unfortunately the very man who created her has died so this is extremely unlikely to happen.

Mores the pity for us.

Final Rating – 7 / 10. A somewhat flat finale to a really strong series. Nonetheless worth watching, and wraps up all loose ends nicely.