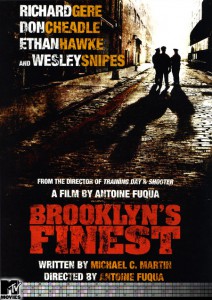 A dirty cop, a jaded-retiring cop and an undercover cop walk into a movie… Grab onto the handrail this is a bumpy ride, and not as humerous as the first line might have you beleive.

Brooklyn’s Finest addresses a particularly rough period in the roughest neighbourhood of one of the rougher cities in America from the perspective of three of the cops in the area.

Richard Gere is Eddie. In the usual cop film cliché he is a week from retirement, jaded and worn down by years of dealing with the grind of crime, drug use and depravity.

Ethan Hawke is Sam. He has lotsa kids (and I mean lots), significant financial issues and a yet-again pregnant wife who is growing sick from living in sub-standard conditions.

Don Cheadle is Tango. An undercover cop who has been under a little too-long for his own sanity, away from his wife and friends. His position is further compromised by the release of his long time friend and scummy criminal Casanova (Wesley Snipes).

Now I know that movies need conflict and things to overcome to provide tension and action but just writing those brief summaries felt like I was visiting the Cop-Movie cliché warehouse. Cramming all of these ideas and problems onto three characters seems a little much.

Things come to a flashpoint in this particular Brooklyn district when a cop guns down a young black male in an apparent robbery committed by the cop. This occurs in one of the most troubled areas of the city, in fact 20 yards away a gang bags drugs for sale while the investigation is in full swing. Coupled with this is the fact that the cops seem to be losing control and respect in light of the killing, lacking manpower they decide they have no alternative but to team rookies with more experienced cops in the hope that they pick up the ropes quickly.

To further the predictability of the plot

As the movie progresses you can pretty much guess what will happen next, but really that isn’t a big problem. For all the clichés and predictability Brooklyn’s Finest is actually OK, it eschews big explosions, exhilarating car chases and massive shootouts in favour of more realistic actions and reasonably clever plot events, and it keeps things pretty simple in a stereotypical way so that the audience can keep track of everything. And how does it do that?

ALL THE BLACK GUYS ARE BAD AND ALL THE WHITE GUYS ARE COPS.

I don’t think that it means to be racist, but that’s exactly how the film pans out.

For my gentleman readers, there is also a fair bit of tittie, some of it rap-video extra quality.

Final Rating – 7 / 10. A standard rating for a standard movie. It takes all the clichés but handles them well. Not a great movie but a good, albeit unfocussed cop story.