The Girl with the Dragon Tattoo 2009 (Review) 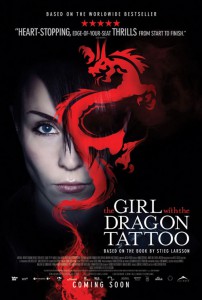 Lizbeth had a particularly tough childhood. Issues with her parents have seen her spend time in custody, and have resulted in her every move requiring approval from authority figures. Years of having been let down and possibly taken advantage of have resulted in Lizbeth being anti-social and mistrusting of almost everyone. She is introverted and afraid of any intimacy or closeness.

She is now 24 yet still lacks any feminine curves, her body resembling that of a teenage boy, wiry and slender. Her face is often covered by lengths of lifeless hair, and often on top of that by a hood drawn close. She has a few more facial piercings than would probably be deemed necessary by mainstream society (the guy who cheated around on Sandra Bullock might like her though), and her attire might best be described as “Goth casual”, big boots, skinny jeans and a hoodie.

Perhaps not the chick you’d take home to meet Mum for Sunday brunch, but Lizbeth is not a thug or anyone’s skanky girlfriend. 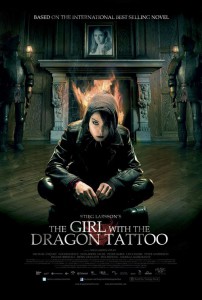 Lizbeth in her Sunday best.

She is also not helpless. After a random attack in the subway Lizbeth fights back even though she is clearly outnumbered and probably outmatched. In desperation she refuses to yield and grabs a broken bottle, swinging it wildly until the thugs leave, but worse yet is still to come for Lizbeth.

After her existing parole officer equivalent fell ill she is informed that she is to deal with a new man. In short he is a cock. Bossy, manipulative and sleazy, he realises that Lizbeth dare not act up for fear of being locked up again, so he imposes restrictions on her activities and bank accounts. When Lizbeth informs him she needs cash for a computer he demands… “favours”, then doesn’t give her enough cash.

When Lizbeth goes back to ask for more cash, he repeats his demands and goes a step further, too far. Way too far.

Lizbeth’s response is cool, calm and calculated, but also brutal and immediate. After her taking action though it would be fair to say that the demands on her schedule and finances clear up significantly.

While she might appear like an early Tim Burton creature (before he stopped writing his own stuff and started remaking every book in the classics section of the library) Lizbeth has skillz. Much sought after skillz indeed.

Loosely described as a “researcher/assistant”, Lizbeth is a skilled computer hacker, contracted by those that need Top Secret info but don’t mind not knowing how it was sourced. She also benefits from a photographic memory and amzing powers of logic and perception. None of this helps with her people skills though, Lizbeth is still terse, often rude and easily offended.

Lizbeth is contacted one day by Michael Blomquist, a disgraced journalist for his personal written attacks on a well known politician which have seen him fined and due for a stay in prison, even though his claims that he is telling the truth and that his sources and evidence have been covered up by parties unknown fall on deaf ears. The story is a big deal in the media at the time.

But we’ll get back to that.

In the 6 months left before his sentence starts Michael is hired by a wealthy recluse named Henrik Vanger to investigate the disappearance and presumed murder of a 16 year old girl some 40 years prior. The girl happened to be a carer of Michael’s when he was a little boy, and wanting to stay out of the limelight for a while he takes the job and moves into a house on Henrik’s estate.

Vanger is remarkably blunt and forthright, informing Michael that he is sure that the killer is not only still around 40 years later but is likely a member of his family. Being from Sweden some of Henrik’s brothers and other family members had Nazi ties in the 40s and 50s, and they are still aggressive and hold their extreme views. Henrik receives a framed pressed flower each year on his birthday from a different point on the globe and is positive he is being teased by the killer, as this was what the young girl Heather did as a child.

In the ensuing days Michael meets some of the extended family and members of the local police force, both inform him that he is wasting his time and effort.

In one of those photo manipulation things that I am positive can only happen in movies Michael manages to find a significant breakthrough, he also finds a code written by Heather, but is disappointed to find that the code is already well known and that despite best efforts no-one has yet been able to crack it to see what it means.

When Lizbeth helps out with the code from afar via email Michael tracks her down and asks for her help. For whatever reason Lizbeth agrees and moves in to the remote home on Henrik’s manor with Michael.

From here Lizbeth and Michael form an uneasy alliance, Michael is generally a friendly and personable chap but quickly realises Lizbeth reacts quickly and negatively at any attempt at conversation once the topic moves to her.

Lizbeth initiates sex but it seems more as a truce making exercise than real intimacy, and once proceedings end she is soon back to her own bed. As they progress through and seem to be moving closer to a solution they become more at ease in each other’s company, however Lizbeth is still prone to becoming instantly defensive and withdrawn, and she wants no part in dealing with authority.

A major development seems to suggest that they are on the hunt for the perpetrator of a series of murders involving young female victims, and it seems that their investigations might be attracting the attention of those that may want them to cease and desist.

It must be said that for a while it seemed that there were too many goings on happening concurrently and there was no way to bring them all together, but even at 2 ½ hours this film didn’t really drag on too much.

Thankfully once the truth is finally exposed and the full story is apparent it all makes sense and falls into place, this isn’t so much a whodunit in the standard sense but it was nice to have some satisfactory closure rather than an arbitrary “well I guess we’ll never know” copout.

The investigation serves more as a backdrop for Michael and Lizbeth’s relationship as it develops, which allowed tidbits of information about her past and the reasons behind her mental state to be released.

Lizbeth is indeed a complicated girl, I understand this is the first of a proposed trilogy, I only hope that the actress that portrays Lizbeth here remains in the part as she has a magnetic screen presence, even when subtitled. I know this is based upon a book I have never read but I am unsure if Michael is set to feature from here on in, in either case I plan to be along for the ride.

Final Rating – 7.5 / 10. Not a world beater but refreshing to have a highly rated and intriguing premise live up to expectations. Press play early, this is 150 minutes long but worth hanging around until the end.

2 Responses to The Girl with the Dragon Tattoo 2009 (Review)