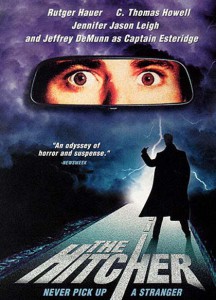 Might want to look ahead instead of staring at yourself.

A young man named Jim (C. Thomas Howell) is travelling the long road to California when he picks up a hitchhiker in the rain. The Hitcher is straight to the point, his name is John (Rutger Hauer), he has killed before, and he will kill Jim. Very soon.

Understandably a little perturbed by this turn of events Jim makes a lucky escape, now alone again and exhausted he continues on away from his near death experience.

What a story he will have when he arrives in Cali!

But wait, there’s more. Jim and John come across each other’s paths about 237 more times over the next hour and a half, sometimes by coincidence, other times due to John’s almost supernatural ability to know exactly where Jim is on the long desolate road – maybe he just has a sat nav unit some 25 years before anyone else?

Such is Rutger’s domination – they call him John but he’s always Rutger to me – that he disdainfully declares to Jim at one point that “I can kill you whenever I want”.

A waitress at a diner with the very sexy name of Nash (Jennifer Jason Leigh) becomes embroiled in proceedings, but the cops all think it is Jim doing the misdeeds, with Rutger/John being somehow invisible to all else but Jim and Nash.

We have the usual situations where the stoopid cops don’t listen and it costs them, the bad guy who always seems to be around the corner or in the car or room without anyone knowing, and the desperate teens who just want this all to be over.

Rutger obviously relishes being the bad guy in a time when it wasn’t that cool to be one onscreen if you were a big star. His John is genuinely nutso and blasé about the risks he has put himself under. He has no real motivation behind what he is doing and no masterplan to get out of it – he simply enjoys topping people on the highway and takes particular delight in shadowing the understandably panicky Jim.

At times he almost seems apologetic that he is so far ahead of his quarry such is his apparent omnipotence, and he gives the duo a headstart to make the pursuit more sporting.

The Hitcher is even more straightforward than perhaps the above stuff made it sound, but even though it has some predictable moments they are quite well handled and while there is never any doubt as to how the film will finish the ride is worth it.

See, I resisted a lousy “this is one ride worth hitching on to” joke.

Final Rating – 7 / 10. Some 80s movies were straightforward and formulaic, many movies of this millennia should stand up and take notice that this isn’t always a bad thing