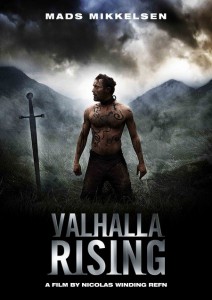 I’m about to call this film “watchable”, but as I thought about the ins and outs for this review I realised that there are more disclaimers and *s needed than there are relevant plot points and items of interest.

But aside from this next para I will try to avoid copping out with vague stuff and each-way recommendations, this being a film where it should be impossible to remain on the fence.

However, this first: The “OGR disclaimer” originally came to being after I watched a film called Cube over a decade ago and recommended it to a friend, who subsequently watched it with his wife who provided me with some less than warm feedback at such a “dodgy recommendation”. Since that point any time I make a recommendation about an obviously non-mainstream film I feel compelled to also add “… well at least I thought so”.

… well at least I thought so.

It is ancient times in what I assume is Viking land, though we are never explicitly told. Small tribes of filthy and brutal Pagans and Vikings hold what might be the first handicapped MMA battles between desperate combatants.

The “Kimbo Slice” of the era is an unnamed slave, caged when not in use and owned by a ragtag bunch. Like Danny the Dog from Unleashed once out of the cage he is immediately into action in these to-the-death battles – which it must be said include jugulars being ripped out and heads being caved in by big rocks.

This one-eyed silent and unnamed savage is obviously the tribe’s biggest asset. They decide to sell him and head off… 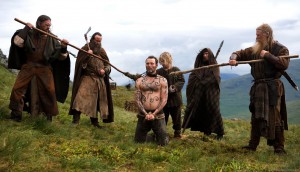 Ultimately the slave escapes and exacts revenge for his captivity and torment, again brutally, a young boy of maybe 10 or 11 decides to follow – but basically he has no choice as the remainder of his travelling party are in various bloody pieces and he has no idea where his home is – when in doubt, follow the guy who can kill everyone who fucks with him!

The boy; who I will call Newt due to the Aliens similarities – dubs our unnamed guy “One Eye” due to his ocular limitations. When they come across some religious zealots determined to spread their word to savage nations they tag along, mostly because for the first time in a long while these people don’t initially try to kill them.

What follows is a long and mostly pointless voyage of non-discovery and limited action. The sea voyage seems doomed to fail and the religious men grow fearful and ill, blaming One Eye and Newt for cursing their crusade.

As you might expect from even the 200 odd words above One Eye has some severe brain issues, and his nightmares and daydreams are disturbing, violent and vivid. Either awake or asleep he remains vigilant and prepared to protect both himself and newt by any means necessary, something he displays on more than one occasion through the film.

Eventually the group find land after what seems an eternity – both in the film and from the couch watching it – but the action neither becomes more easy to follow or accessible. Party members drop off periodically, both due to events between internal party members and some unseen enemies, but 96% of the time the events don’t provide any more development in the plot or understanding of the events.

It is merely shit that happens in random order.

The film ends abruptly after what I guess what you might call loosely a “finale”, but really it doesn’t complete the story or provide us with a moral or a message. In fact Valhalla Rising is less a narrative or event driven film than it is a far more brutal version of The Road (which in itself was bleak and savage), but for some reason this does not make it any less interesting, compelling or powerful.

I really think this would be a totally polarising film, you would either like it or absolutely revile it as worthless or disgusting. Given those two extremes I find it hard to admit that I am a little on the fence, while I won’t be joining the chorus bagging it I also won’t be hanging from the rafters singing its praises…

Valhalla Rising is an uncomfortable and at times ultra violent 90 minutes. It tells less a story than show a few weeks in the life of a deeply troubled individual and his ward, but I found it nonetheless worth the time – even though now I have seen it I doubt I will seek it out for another look.

Final Rating – 7 / 10. Well at least that’s what I thought. This is the sort of film that will elicit extreme reactions.