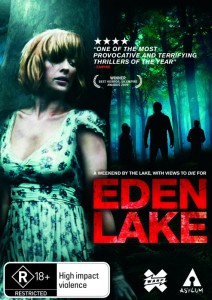 Jenny ran when Toothless Joe won the round of spin the bottle.

Eden Lake starts innocuously enough, a young couple get away from the din of the city for a weekend away at the titular lake. They are Steve and Jenny, what they do for a crust or where they come from doesn’t seem important – indeed they are basically average middle class people doing middle class things – the only thing that seems important is that Steve is planning to spring a proposal of marriage on Jenny during the trip.

The first night finds them arriving at a small town near the lake after a long and taxing drive where they stay at a bed and breakfast.

They settle in for the evening and enjoy a quiet pint. Their night isn’t so much interrupted or ruined but suffice to say other guests aren’t relaxing in the same manner, and there is some unwelcome noise coming from other rooms and in the beer garden.

Not to worry… the next day sees the couple take the short drive into the backwoods to set up camp on the shore of a large flat and picturesque (for the UK I guess) lake. They do normal couple stuff, swim, picnic and sunbathe in the “glorious” UK mild summer – there’s a reason Brits head to Australia for the Summer folks – and all seems good in the world.

Then the film takes an unwelcome U turn into News of the Week territory. A group of “unruly teens”, some perhaps even preteens settle in only a short way down the lakefront and commence being “unruly”, swearing loudly, playing loud obnoxious music and overtly perving on bikini’d Jenny. Steve is 25 ish and fit so he heads down to sort all this out, which backfires when the whippersnappers openly dare him to “do summin’ abaht it mate” and set to him verbally.

I should also point out that they have a big vicious dog barking away the whole time.

That night in the tent on the shore Jenny and Steve feel as if they’re being watched – and they’re not sure they like it.

The next day things progress in a negative manner. Now this is one of those films where the dueling protagonists continually bump into each other repeatedly in convenient situations – or in this film extremely inconvenient situations. This is exacerbated by the fact Steve continually seems to make irrational and plain old dumb decisions when faced with rational alternatives.

Anyway Steve holds a grudge which flares next day. After some comparatively smalltime events the kids nick the couple’s car and joyride it about, leaving them on foot in the middle of nowhere with no option but to hoof it. In a remarkable turn of events they chance upon the kids who are gathered around a fire in the forest continuing to be “unruly”.

I can’t go much further but Steve decides to confront the kids – fair enough – but when the kids pull knives and the ensuing struggle takes an unexpected (yet totally expected) turn the tone of the tenuous relationship changes from “baiting and resentment” to “full blown hatred and violent intent”.

The remainder of the film has the duo chased, hunted, tortured (both psychologically and “other”) and generally bothered all over the forest as they attempt to get away. It is all quite reminiscent of the last half of the far superior The Descent, only with peachfuzz cheeked teens in lieu of albino sightless crawlers.

This is why the film didn’t work for me, I can read the paper to find out about the latest pointless act of sensory numbing violence that happened somewhere in the world, there is a sob story coming out every week to make you feel worse about the state of humanity. I don’t need to see a bunch of dipshit kids who should be trading football cards and laughing when someone says “Boobies” stalking and terrorizing innocent people Romper Stomper style over the shop.

In reality there is zero to be scared about in Eden Lake besides the very concept of “teens hunting couple for practically no reason”. There are no “boo” scares, no amazing reveals that provide the unexpected, in fact the only moment to provide any tension in the film is exactly the same moment that has been in dozens of other films – one person hides while the baddies hunt and plot nearby, waiting for them to leave.

Look if this is what you call horror then good luck to you, but an absence of genuine cinema scares and a lack of creativity makes this a depressing and uninspired exercise. I’d think the same even if it was monsters or alien creatures hunting someone if the plot was the same – but the fact that it is 12 year olds running around with pocket knives stabbing and lighting people on fire doesn’t make Eden Lake scary – just sad.

Final Rating – 5.5 / 10. A solid build up is wasted by a lazy second half that steals from numerous better films and gains notoriety solely by the so-called originality that differentiates the protagonists.

While I try to throw a joke or two into proceedings when I can all of the opinions presented in my reviews are genuine. I don't expect that all will agree with my thoughts at all times nor would it be any fun if you did, so don't be shy in telling me where you think I went wrong... and hopefully if you think I got it right for once. Don't be shy, half the fun is in the conversation after the movie.
View all posts by OGR →
This entry was posted in Crappy Movies, Film, Movie Reviews, Special Requests. Bookmark the permalink.