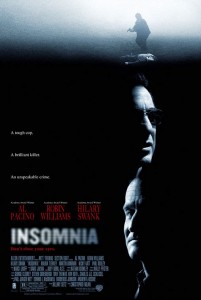 Al and Robin (and Hilary), just chillin’ in Alaska polishing their Oscars.

You can’t argue that Insomnia doesn’t have a strong cast. There is no point, but even the triple Oscar-gang can’t make this any more than a Christopher Nolan training film.

Insomnia is a very good film, but not a patch on what he has done since.

Will (Al Pacino) and Hap (Martin Donovan, another very good actor but to date Oscar-less), are US mainland detectives sent North to Alaska to help with a murder case. It turns out that they have more or less been “shelved” for a while as an Internal Affairs case is investigated against them. Just how guilty they each are isn’t evident but it is clear that they are neither squeaky clean.

The Alaskan murder is of a young High School aged girl named Kate, who it appears was beaten to death by someone she knew.

Initial investigations introduce the guys to Hillary Swank as Ellie, an idealistic detective who studied the case files of Will and who obviously idolises him and is ecstatic to be working with him. They have the usual Law and Order scenes, the body in the morgue chat with the mortician, the surly boyfriend who “ain’t sayin’ nuthin” and the stakeout of the murder scene.

The difference is these all occur in Alaska in the middle of so-called Summer, when it is as bright as noon almost around the clock, and each night Will and Hap hit the hay exhausted yet unable to cope with the fact that the sun still rides high.

The stakeout of the murder scene leads to a sighting of the suspect, who is alerted due to a police mistake and scarpers. During the chase poor visibility makes things difficult for the pursuers, and … without giving too much away let’s just say that something goes wrong.

As this is a sorta whodunit for a while at least more detail is unwise, I can say that Will and the suspect do meet, and that complications arise so that a cat and mouse game has implications for many parties.

The final third of the film is Heat-esque, in that both parties meet and converse in a guarded manner, each hoping to outwit the other but neither willing to show their hand unless absolutely certain of success.

Enough plot: this is a smart film with really good acting:

– Al plays the old hand role well, he is a little jaded yet still determined, but as the film goes on he becomes more exhausted and rapidly runs out of patience and options.

– Hillary is naive but not stupid, and as the plot progresses and becomes more intricate, so too does she gradually piece things together and come to realise what is actually at stake.

– OK but Robin Williams is on the cover, why don’t I talk about him? Let me just say that Robin Williams as a comedian died for me many years ago, smothered under a million tired and pointless stereotypical jokeless impressions and boring meandering stories that went nowhere. That said he can be a very good actor, and he is here. Understated, cautious yet confident, Williams gives the movie a boost just when things were petering out.

Finally: As there is a few deaths in the film, one scene handles “the call”. I only realised as the scene finished that not many films handle “the call”, where one character must call the loved ones of the deceased to explain what happened. In Insomnia it is a very powerful scene even though we never meet the person on the other end of the line, more films should have ago at it.

Now a few days after I watched it I want to give the film a better score, but I gave it a solid 7 then, and I hold that score now.

Final Rating – 7 / 10. Definitely worth the 90 minutes. Saying this is Christopher Nolan’s worst film is like saying Electric Ladyland is Hendrix’s worst album. It is true but still a very solid work nonetheless.