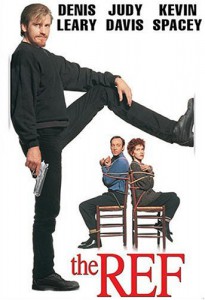 They’re not really that small, they’re behind him.

There’s no denying it…

Most of the humour in The Ref is a result of people being mean, and not just “Your Mama’s so fat” mean, but “Your Mama’s a cocksucker” mean. Had I not seen it already my first reaction to that is I am as tired of mean-spirited humour as I am of torture masquerading as horror. The fact that it is mean does not make something funny, similarly the use of torture does not necessarily make something horrific. Hostel 2 and a couple of the Saw’s proved that, and worse still they inspired a bunch of copycat sub-par clones that think the opposite is the case.

But if done with a little creativity and in the right context, calling grey haired old ladies “cock-suckers” in front of their children and young grandchildren can be funny. Hilarious even. The Ref makes no concessions to political correctness, it is witty, razor-sharp and well plotted and written… and yes mean spirited.

It is Christmas Eve.

Gus (Denis Leary) is a small time thief, deliberately small time. He plans his heists carefully, takes what he can and lies low for a while, as he says himself he can get in and out of whatever he wants without being detected. By not aiming too high he normally stays under the radar and out of harm’s way. On this night the job was to provide enough cash to see Gus out for good and he and his practically useless alcoholic getaway man Murray would see their days out in paradise somewhere.

Only this night things went awry, Gus triggered an alarm and Murray bolted leaving Gus to fend for himself, covered in cat piss and with dogbites on his arse. In a small town the news that a crafty burglar is loose is met with instant reaction from far more quarters than simply the police.

Now the houses Gus chose to steal from were of the well to do (and apparently therefore) “important people” who know others in high places. The police chief is well meaning but ultimately powerless once the local high and mighty gain momentum.

With a full court press designed to nab Gus resulting in a curfew and door to door searches Gus is desperate for somewhere to lie low, he takes some impromptu hostages in a convenience store, Caroline and Lloyd Chasseur.

This is where the fun starts for all involved.

Lloyd and Caroline have been experiencing “marriage problems”, in short they basically hate each other and constantly bicker and argue. In betwixt their disagreements is their conniving son Jesse, himself a small time crim who dabbles in blackmailing his military school teachers.

Being Christmas Eve Jesse is due home imminently, as are Lloyd’s brother, his wife and kids… and Grandma Rose for dinner.

Gus is unaware of what he getting himself into by selecting Lloyd and Caroline, and in the early stages he struggles to maintain control of the situation even when they are tied up. The couple constantly forget their situation such is the power of their mutual resentment, and they ceaselessly tease and snap at each other and Gus. Gus finds he is pretty much stuck for a while until Murray can find suitable transport, so a plan is hatched that will enable to the dinner to go ahead, Gus will simply play the part of the couple’s marriage counsellor.

All this sounds pretty dodgy but I can assure you it all works very well.

So Jesse arrives first and is immediately tied up and left upstairs as a bargaining chip so that Lloyd and Caroline play along and don’t disrupt proceedings. Once the rest of the family arrives it is clear that the standard of manners aren’t going to simply improve. To keep matter brief Lloyd’s brother is a downtrodden pussy, his wife is a snarky overbearing pretentious bitch, their kids are no prizes either but not too horrible, and Mother Rose…

Mother Rose deserves her own movie in a perfect world. She is unbelievable. Acting as if the world owes her a favour she is instantly grating, sarcastic, bitchy, presumptuous and scathing, and woe-betide anyone who disagrees with her or dares to criticise her or her actions. The worst thing is that she coolly and calmly spits out every poisonous thinly veiled barb with poise and confidence, like she is doing you a favour by pointing out all your failings. If a more reprehensible 70 something Grandma exists I am yet to see her.

Dinner proceeds as planned, complete with an elaborate theme and formal settings. Everyone fakes getting along for a while, just like every large family gathering, but Mother Rose fires things up and then Caroline gets a little drunk. Snippy chat soon turns to a full blown argument, which in turn then explodes into open family warfare. No stone is left unturned and no foible unmentioned as they all hoe into each other with gusto. Gus’s mood changes from bemusement to a sense of powerlessness and he gives up pretending that he is a marriage counsellor and steps aside for a while.

At the conclusion of the dinner everything possible has been aired and no opinion has been covered up or withheld, there is a lot of swearing, inappropriate comments all around and some extra special rants that have to be seen. Again swearing and trash-talk humour isn’t necessarily funny if it is clumsy or lazy, but here even though the lines are laced with venom and the characters treat each other with disdain it is all unfortunately quite believable and brilliantly delivered.

You really think Caroline and Lloyd hate each other, the sister-in-law despises them both and bullies her kids and husband, and EVERYONE detests Mother Rose but puts up with her because she ultimately is cash up and has to die sometime right?

And this is before they decide what to do with Gus. The finale seems a little unlikely but is the only mildly satisfactory resolution I guess that was available, this is after all just a comedy. But it also just a very, very good one.

Final Rating 9 / 10. Words are just words, but on this night they are very much weapons. Next Christmas dinner must have been verrrry uncomfortable.