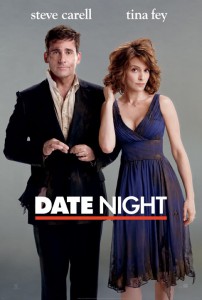 Kick this dud date to the curb!

Date Night looks like the result of a writer being half drunk and scribbling some random thoughts on a beer coaster. It is so formulaic and uninspired that it should have been called “A Series of Convenient Plot Devices and Delightful Misunderstandings”.

In fact without Steve Carrell and Tina Fey on the poster this would have instantly sunk without a trace, and deservedly so.

If you asked me to describe what I thought Steve Carrel is like in real life using only one word, I’d say “likeable”, maybe even “inoffensive”. For Tina Fey, also “likeable”, you might even elicit a “spunky” out of me on another day. Why these two people are chosen to be the leads in a film about a couple that have lost the “spark”, and feel that they are simply “existing” in a faulty marriage is beyond me. They both get along, are good parents and love and help each other, where’s the flaw?

And that’s the problem with you Mainstream! You will accept any tripe that you are given as long as it is delivered with a friendly familiar face.

“Oh that looks shit. What Cameron Diaz is in it? Well I better watch then.”

“Drew Barrymore made another mediocre film? Where’s the popcorn?”

“Yeah Lady Ga-Ga, looks like a melted Barbie and sounds like a leaky tap being turned on too high, but she’s on the radio all the time. Better go buy the album…”

Which brings us to:
“Steve Carrell and Tina Fey, they never actually made me laugh and I don’t watch either of their shows, but E channel tells me they had a blast making the film and became really good friends during the process, guess I might as well go sacrifice $50 to piss two hours of my life away?”

Steve and Tine are hubby and wife Phil and Claire. They lead a routine existence, love each other and their two kids, everyone gets along; but the spark is gone. Apparently they miss the spark.

So in a totally outlandish development Phil tells Claire that this weekly Date Night they are heading into the CITY for dinner. Once they get to the restaurant they find out that no reservations means no dinner and order drinks. When after a few minutes no booze is forthcoming they grow bold and take a reservation that wasn’t theirs.

Half way through a magical dinner some dudes show and ask them to step outside, at this stage they think they have been sprung for reservation snatching. But these dudes are after something else, something the people who made the reservation have, but not little old Phil and Claire.

The rest of the movie has them running all over the city in cutesy “Oh I can’t believe this is happening to us” situations saying “Oh I can’t believe she just said that” stuff, normally featuring penises and vaginas (each organ gets crammed into multiple alleged jokes). Of course the bad guys mistakenly think their desperation actions are the work of pros, they continuously run into each other and there is all the PG level violence that the Mainstream can handle.

Oh and they have a bunch of “name” actors spotted throughout the film, Mainstream will recognise them from when they were last in Who magazine. They even get to use the regulation (no more than) 1 F Word. I bet if Tina said it this would be labelled edgy, and they didn’t want that so Steve got to say it this time.

I bet in Date Night 2 Tina gets a go.

By the end Phil and Claire realise that their little existence isn’t so hum-drum after all.

And it’s all over in an inoffensive, at times spunky, and above all likeable 90 minutes so you can get some icecream on the way out.

Final Rating – 5.5 / 10. Watch the preview and I bet you could describe the film as well as me. This is indeed that straightforward.