Underworld – Rise Of The Lycans (Review) 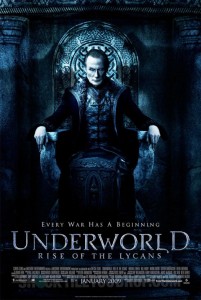 He even overacts in the poster.

I look forward to these movies sort of movies for some reason even though I am always 99% sure that I will be disappointed when I see them. You know, the mid budget movies with delusions of grandeur. It’s also why I love sport and generally support the underdog, because when you have an overwhelming favourite that wins 90% of the time, nothing beats being there or at least watching your underdog team get up.

So I watch these movies for that 10%, the miniscule chance that something set up to fail will tick all the boxes and turn into something legitimately great. But for every “The Matrix” there are 137 “Universal Soldiers”.

Underworld 3 is obviously the 3rd in a pretty bland series, but a series that has always had undeniable potential. Come on, Vampires Vs Werewolves with Kate Beckinsale in skintight leather, surely someone could make a kick ass movie from that premise?

It turns out no. Underworld was OK but it only proved that Scott Speedman has the personality and charisma of a potato.

Underworld 2 suffered the same fate despite a cool new beastie, but this time showed that even a sex scene with a hot chick (Beckinsale) could be boring (something “Watchmen” replicated this year).

Underworld 3 is actually a prequel, I guess because Beckinsale won enough Hottest Chickie awards to not have to spray paint on the shiny suit anymore, in this instance we have the poor man’s Beckinsale Rhona Mitra, who has been a bit player in a few movies and apparently was most famous for a time for being the public face of Lara Croft.

The story takes us to 20 years before the events in the first movie, and basically concerns how the Lycans decided that they’d had a gutful of being slaves and would rather run around like free range werewolves.

Basically, Lucien is a kid born from a werewolf, and for whatever reason he fell into the Vampire’s hands and they decided not to knock him on the head or bag him and throw him in the river, but keep him around as a sort of bodyguard (once he grows up).

I’ll get this wrong, but wild werewolves attack humans, Vampires protect the humans and use the Lycans as slave muscle. They keep the Lycans from transforming at inopportune moments by special collars, I’m not sure if they were dual purpose and killed fleas.

Things get a little soapie when adult Lucien starts getting it on with Sonja, the daughter of head vampire Viktor, played by Bill Nighy who is the link to the other 2 films. I’m not giving anything away by saying the vampires find out about the tryst and are none too pleased with the situation, and then the rest of the movie deals with how they react.

Given that if you’ve seen the first film you know who lives and who probably doesn’t so I’m not gonna waste my time and recap further.

Here are my random thoughts about the film though, as watching this gave me plenty of time to muse over stuff other than watching the film.

Bill cracks me up throughout the movie as Viktor, he spits every word he says, Agent Smith style (I realize that’s two Matrix references in one review, and I’m not even a big fan. In fact I think I’ve seen the original twice, and not for about 6 years). I also thought I kept hearing him mumble “Think of the paycheck” under his breath in between every sentence. I guess my point is he reeeeeaaallllly phoned this one in.

This movie is the ultimate example of making a movie in order to say that you have made a movie, everything is technically proficient without being awesome.

Oh, examples you say? (What an insolent and demanding pretend reader you are.)

–        The fights are technically cool but are obviously laced with CGI and wire-work, and you can almost hear the actors saying “Step: and pivot: and swing: and step: and roll: and slash”, they are so mechanical they make most 60’s karate movie fights look unplanned and spontaneous.

–        The actors are all appropriately good looking and for some reason look like they just stepped out of the shower, except those playing poor people who are appropriately scruffy, but without a speck of dirt or a scratch on them.

–        And lastly there are horses throughout the movie, and not a single horsie nugget on the roads!

–        Script wise they actually get someone at the end of the film to say “No, it’s just the beginning.” I can’t remember a more clichéd and clumsy attempt at a seamless link to the next film.

The new director of this one I think did a lot of homework by watching “300” about that many times, especially the early fights.

Basically if you love the first two, you’ll probably like this one. And if you really like the first two I shouldn’t bag this movie, as it is highly likely that you might be the only suckers on this planet bored enough and with enough time to read crap like my website. (Also, a couple of my favourite movies are “Tremors” and “Coming to America”, I don’t think I am in a position to come off all highbrow.)

This movie sucks though.