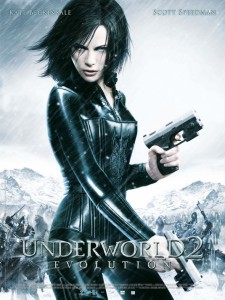 Because you’re worth it.

Underworld: Evolution opens with a brief history lesson; it turns out werewolves and vampires haven’t been buddies for over 8 centuries and counting. We also learn that the lead werewolf and the lead vampire are brothers William and Marcus, bitten by wolf and bat respectively in what must have been a hell of a scout camp.

With William exhibiting decidedly wolffish tendencies he is immediately locked up much to Marcus’ chagrin , but regardless of brotherly ties William remains in captivity until this very day.

I wonder if that will come up later? Also, who fed William his kibbles and bits for over 6 decades? Did anyone take him for walks? I feel there is a film in there somewhere…

We then rejoin the action from the first film, with Selene (Kate Beckinsale) and Michael (Scott Speedman) on the run pursued by vamps angry at the perceived betrayal. Selene thinks that if she can just track down hibernating leader Marcus she can tell her story before the others dob. But Marcus has already awakened, and he is already pissed and feeling proactive.

In other news the emotionless Michael is coming to terms with his own set of changes, and Selene has a neat piece of jewellery that others like the look of.

There is a cool little chase in the early going, followed by a sex scene where sparks only fly because the two actors are so very wooden. (Yes I called the precious Ms Beckinsale wooden.) After this 5 minute sequence Wiseman can’t help but complicate matters to the point that you give up trying to follow.

Surrounding the several supposed bombshells and revelations is an hour of film so boring that even when the goings on culminated in a shoot out in what appears to be the batcave, all I could think of was how patent a replica of e first film this all was. That and how a helicopter with a rotor going full bore still didn’t move an inch for the entire scene.

There was a chance that the Underworld franchise would have turned out better. If someone other than Len Wiseman was handed the reins they would have acknowledged the flaws of the original and ideally fixed them. They might have seen the potential and built on the flimsy foundations laid by the first film.

Unfortunately Wiseman decided he was still the man for the job and, ignoring all the issues that made the original so banal and tedious at times, went ahead and promptly made the exact same film more or less…

Final Rating 6 / 10. I should mark it down for laziness, but the chase scene is a good one, and that Beckinsale sure is purty… And talented… (Whoops, over-reached there.)