There are an awful lot of stand up comedians running (standing) around these days. As with everything 90% of them are average at best, which I am pretty sure doesn’t work mathematically but it is just the way it is.

I don’t really think stand up has ever really been truly “big”, and I don’t really ever seek it out, but if I come across a genuinely original and talented comedian I generally try to follow them through their career as best I can.

Too much stand up nowadays is limited to one of the following areas:

A great comedian can make anything funny, even the above topics, but it comes across as lazy with most other sub-par comedians, as does using the same punchlines again, and again, and again….

And so on and so forth, reread the list and you’ll find that there is nothing there that isn’t already common knowledge. If only we as an audience stopped laughing maybe they’d rethink their approach and take more care with their material, but it seems that most members of society would rather laugh after hearing things they already know.

So I generally look for comedians that attack from a different angle and have a punchline that you don’t see coming 3 minutes away, but above all they still have to at least be consistently funny.

You won’t find any comedian/slash musicians here either, they usually piss me off. (The notable exception being the honourable mentions.)

The following list has been forged over the last 5 or so years, if I hear someone is hilarious, I’ll check them out and make up my own mind, as guys like Dane Cook prove that even overwhelming public opinion can be so very wrong. This is where Youtube comes in handy, you hear about some guy or maybe watch him do a short set on Leno or Letterman, you can Youtube him to see if he/she is actually that good. In the past you might have waited weeks or months to catch them again, or worse take a punt and shell out for a crappy album.

I invite you to Youtube any of these, if you are willing to give them a shot (and have the capacity to think for yourself), you may be pleasantly surprised.

The following three didn’t really fit the criteria, but I think they are all funny as hell anyway:

Flight of the Conchords – I found out about these guys from their TV show as most people have done, which is mostly brilliant, and at least very amusing the rest of the time. The one example of musical comedians that I can stomach, I have since seen their HBO special and both the songs and the stage patter between them is inspired. I have heard that they are giving up their show, I hope this is not the case.

Tenacious D – Two fat non-goodlooking guys form an acoustic rock band, and yet somehow it works. When I bought the first self titled album shortly after it was released me, TOG and a few other mates listened to it on repeat for the entire night while we were playing Playstation. And for the first few months I listened to it at least fortnightly, usually when another friend cam around. (Pick of Destiny: Not good.)

Not only that but with both of the above cases the songs would be pretty good even if they weren’t funny in the first place.

Ricky Gervais – I have seen his three stand up specials, and while they are all quite funny I think the funniest bit of Ricky Gervais is his own persona. I really believe that he is fully aware of just how brilliant he is yet genuinely humble at the same time. Like Russell Brand he is funniest when just being himself, although unlike Russell Brand I think he has a brighter future. This is of course after he has already made and starred in two of the best comedy shows in decades, The Office and Extras.

And now, on with the funny!

10/ Dan Naturman – Probably the most straightforward comedian on the list but he separates himself from the pack with quality delivery and consistently funny jokes.

Quite an animated delivery style and a distinctive nasal New Yorker voice make sure he is never boring, even if a joke fails, (which is rare from what I have seen.)

9/ Maria Bamford – Perhaps a one trick pony, Maria’s act revolves around a series of voices. Old, young, uncultured and intelligent, she can switch between personas instantly and mid sentence to have long and complicated conversations with herself. When she hits the stage she adopts a dopey young woman shrill, and then peppers the act from there.

Of course once you are used to the various voices all you are left with is sharp comedy which is more story and scenario based, so again that isn’t a bad thing.

8/ Steven Wright – The original and the best. A long, long time ago when cable TV didn’t exist, I grew up with three channels, and the only stand up you ever saw was on the one weekend variety show I can remember. So basically you saw maybe one stand up act per week, usually less.

The one guy I remember vividly seeing more than once was Steven Wright, his delivery was and is so dry you might wonder if he is awake, and his observations so left-field, so literal and often simply genius. Wright is the master of the 15 second joke and because of this remains ever quotable, (as it is easier to copy a 15 second joke than a 4 minute story).

How long has he been making me laugh? Since the late 80’s.

7/ Katt Williams – The newest guy (to me) on this list, I saw Katt on Leno about 2 years ago as a guest, not an act, but I only watched a performance DVD last year. Then  I tracked down his older stuff. Since then I have kept tabs on him to see if he releases anything else.

Katt is profane but intelligent, and makes great use of imagery and particularly his stool. He also recognises the power of a good “hook”, and when he finds one he uses and reuses it through his act. On a “boys” trip last year we watched Katt Williams DVDs over and over, and at times almost wet ourselves laughing.

6/ Wanda Sykes – Wanda is actually funnier when she goes off the cuff, but I have both her DVDs and she has some great bits. Basically the more animated and angrier she gets, the funnier she is.

5/ Patton Oswalt – From here on in I would recommend any of these guys without hesitation, and wouldn’t argue much if someone wanted to nudge them up or down the standings between positions 1 through 5.

Patton was the voice of the lead rat in Ratatouille, which would be irrelevant except I only decided to check him out when he did a publicity interview for the movie and the interviewer (I think Conan) said he loved his stand up.

A self confessed nerd’s nerd. Oswalt’s set is littered with obscure comic references and straight out diatribes on a wide series of topics. He also does a mean impersonation at times and when he has a bit going he keeps pushing it to the very end, for as long as he thinks the joke is funny.

4/ Dave Attell – The guy you’d think you might get along with best if you met them in person. Dave is foul mouthed, disgusting, fat, balding, alcohol abusing and hilarious.

Dave throws in some totally random segues, has some great pointless in between joke banter, and can disgust anyone. That is until you realize that most of his jokes go so far beyond what you might call PC that you are really an idiot if you take them at face value.

3/ Daniel Tosh – Dunno why I rate Tosh higher seeing as he so obviously models his act on Attell, but in general he is funnier and his act is a bit tighter.

Tosh’s thing is pushing a joke to the logical punchline, and then taking it further and further until he stops making sense and risks alienating his audience. Definitely comes across as condescending and downright insulting of his own audience at times, Tosh expects that his audience is sharp enough to understand that good comedy needs to not play it safe and to push things beyond the norm.

2/ Jimmy Carr – The only non American from the Top 10. Jimmy Carr is British, prim and posh sounding, but with some of the filthiest material going around. Add to this the fact that he delights in making his audience gasp due to overstepping of PC boundaries, his punchlines regularly refer to rape, incest, child cruelty and similarly cheery topics.

There are no themes or long stories in Jimmy’s DVDs, just joke after joke after joke. The thing that differentiates himself from anyone else on the list is his direct discussions with his audience, he actually invites conversation and comment and replies to every one, with a great joke ratio higher than you would EVER expect from what must be adlib replies.

He also remember specific audience members and their backgrounds or stories, referring back to them, and if they dare to take it to him he delights in publicly humiliating them.

1/ Mitch Hedberg – I remember the first time I saw Hedberg was on Conan in what must have been 2004, and I remember thinking “This guy is so stoned!” He never once looked at the audience, had almost hippie length hair, and frequently made self conscious movements indicating he was uncomfortable even being there. Aside from this was some of the funniest, insane and obscure jokes I have ever heard.

Hedberg was a guy who took what Steven Wright did, and improved on it and adapted it so much that it is wholly original. Hedberg had a delivery that was totally unique and freely admitted that he had no aspirations of moving beyond stand up into TV or movies, he just wanted to do stand up and improve his act.

Unfortunately in 2005 he died of a drug overdose, which shouldn’t have surprised anyone familiar with some of the material in his act, I also remember reading about it and immediately becoming depressed. I still am.

Find his stuff, you’ll be rewarded.

How long has he been making me laugh? Since 2003 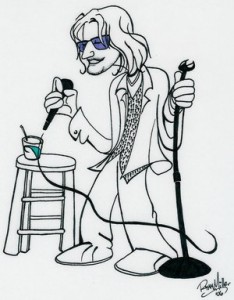 While I try to throw a joke or two into proceedings when I can all of the opinions presented in my reviews are genuine. I don't expect that all will agree with my thoughts at all times nor would it be any fun if you did, so don't be shy in telling me where you think I went wrong... and hopefully if you think I got it right for once. Don't be shy, half the fun is in the conversation after the movie.
View all posts by OGR →
This entry was posted in Lists. Bookmark the permalink.

1 Response to Top 10 Stand Up Comedians