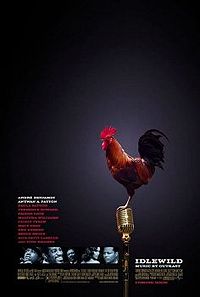 Warning Chicken-Lovers. This guy ain’t in the movie.

About twice a week I grab my scrawled bullet point notes and spend 30 or 40 minutes nutting out two or three reviews, nothing too complicated or exciting there. Then for an hour or so each weekend I search for some relevant photos, check for typos and try to make the structure more readable.

The initial draft is always written on word as the wordpress window is too small and frustrates me, once I have the photos and the review makes as much sense as it’s gonna I cut and paste that sucka into the wordpress draft.

Thennnnnn, about once a month I sit down and schedule the things in so that they appear on the magic box on a certain date at relevant intervals. In between the last two steps I somehow made a balls up with Idlewild.

So a few weeks back I spent some time writing up the Outkast acting vehicle Idlewild, it was great. Probably the finest film review in the history of the world, paragraphs and everything!

So in between that and scheduling the article’s posting (VERBS!) the thing got lost. Gone. Skedaddled, and I of course had killed off the word doc as I thought it was saved to wordpress.

Now I simply can’t be bothered rewriting a fresh review for Idlewild, so in honour of Tenacious D the following is an abbreviated tribute to the greatest review in the world.

It is basically an attempt to “break” (indulge?) the boys from the hip-hop group Outkast in the cinematic arena.

Big Boi plays a guy who runs a whorehouse entertainment venue and Andre 3000 plays the son of a mortician who has the hots for a singer in the whorehouse ahem, nightclub.

The film itself wasn’t bad but it had some serious flaws that made it in truth a little boring. There seemed to be no consensus as to what the main plot was supposed to be, so Big Boi and Dre’s stories kept going on and on, making the film a good 30 minutes too long and forcing them to abbreviate several songs.

I did mention Idlewild was a musical right? No? Well I did a few weeks back… Remember all the VERBS and PARAGRAPHS!?!

My other main issue was that Outkast are a million and a half times better than almost EVERYONE in the game from the 90s, 2000s or present day, yet they only took songs from the underwhelming double album Speakerboxxx/The Love Below. The best song in the film actually plays over the credits, (Morris Brown).

If you like hip-hop and quote-unquote urban films then you’ll find Idlewild OK, and in the interest of disclosure I would say “yes” to both, if you are more a casual fan or worse not a fan you would find Idlewild overlong and unfocussed.

Final Rating – 7 / 10. An OK film, Like Michael Jordan trying baseball it is disappointing when someone at the pinnacle of their industry settles for par elsewhere.

And I am not saying that any of the above never made a good song or two, Kanye has one (Gold Digger), Eminem a couple (Lose Yourself, Stan) and Will-I-Am had some great early stuff (Damn you Fergie for enabling the sell-out!). What I am saying is that in the main the greater part of their resume is mediocre or flat out sucks. Real fans actually buy albums and listen to them from song 1 to song 22 (hip-hop albums are always too long), even hanging around and putting up with the inevitable skits! Having 85%+ as filler is just not good enough, so lucking out with a radio friendly song shouldn’t provide you with a career, I’m talking directly to Kanye on that one. Stick to producing and banging coked up starlets.

Between their debut in 1994 and Stankonia in 2001 Outkast put together a stretch of albums that could only be challenged by Public Enemy, the Beastie Boys and De La Soul, and I’d still give Outkast the edge on all of them.

So in a long winded way my message is don’t bother too much with Idlewild, if you want to see what Outkast is about buy any of the following;

Do that for me and I’ll go back to concentrating on not losing my reviews.