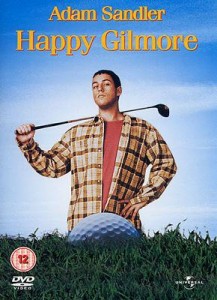 Rewatching Happy Gilmore for the first time in years taught me two things:

2/ Sandler should sue the shit out of Will Ferrell for stealing his shtick, which in truth is not too great in the first place.

As the awful ice hockey turned pro golfer Happy Gilmore, Sandler lays down the formula that he would continue to callously use in film after crappier film. Happy Gilmore uses silly shrill voices, flies into a rage for no reason (usually accompanied by inexplicable screaming) often and is decidedly rude and profane – but only to the rich and arrogant. 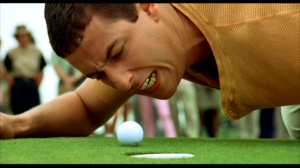 Gilmore sticks up for the underdogs, loser and reprobates and sticks it to the wealthy, cocky and mean. What a guy. I mean the entire film is essentially about Gilmore trying to earn enough money to save his frail old Grandma’s family home.

That doesn’t mean Sandler won’t allow himself indulgences, his fixation with bad 80s rock is laid bare for all to see and of course he ends up with the ‘far hotter than he deserves’ chick at the end. Sandler also indulges others, there are as always cameos from the famous and his buddies (thanks SNL career!), though at least here they serve the plot – the fight with Bob Barker is a highlight – and product placement galore (which I know is referenced in the plot but come on, how much did Subway and Pepsi pay?).

And all this before I mention the immortal nemesis Shooter McGavin, Carl Weathers as the sage one-handed golf guru and the scene(s) where the love interest gets down to her unmentionables. Oh I kinda mentioned that? Well who’s complaining.

Final Rating – 7.5 / 10. Happy Gilmore was essential viewing in my early 20s, and while it is a little too familiar and has been tarnished by the knowledge that Sandler is now little more than a rich lazy bugger without a skerrick of ambition beyond doing what works for him, I can still heartily recommend this over anything that he (or Ferrell) have done since.