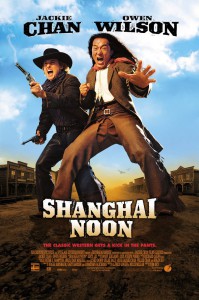 After Jackie turned the buddy cop genre on its head by not having the industry minimum one white guy he decided to have a crack at making his own version of the cowboy movie, an Eastern Western if you will.

This film gets overlooked or even bagged by some as being too obvious or lazy, but damn it it’s actually quite funny and has a couple of worthwhile action sequences.

Sure it isn’t an all time classic but there are far worse ways to spend a lazy Sunday arvo.

Jackie is a member of the Chinese Imperial Guard, sent on a mission to pay the ransom of gold for a kidnapped Princess, played by Lucy Lui.

Of course the princess has been taken to the US by a crooked lawman and a nasty Chinese crim, where they use other Chinese immigrants as slave labour on the mines.

Once in the Wild, Wild West Jackie’s uncle is shot by a gang of desperados lead by Owen Wilson as cowboy Roy O’Bannon, although Roy had nothing to do with the shooting part.

Basically after some shenanigans Roy and Jackie (with the too cute name of Chon Wang, (pronounced John Wayne. Get it?) team up to find the princess and save her, although Roy is more likely after the gold that is associated with the mission.

Owen Wilson provides most of the laughs, and Jackie is more there for “fish out of water” chuckles and to provide the kicks and punches. The pacing is good so that you never get bored and even if it is more a comedy than an action extravaganza it is never less than entertaining.

As I said before even if it is formulaic at times any formula that includes:

An early scene featuring Indians (“cough” Native Americans) works well, as does the finale, where they sensibly (yet inexplicably) have Jackie fighting his fellow Imperial Guard members.

Not really, but Jackie does some tricks in a fight using a horseshoe tied to a rope.

Accommodating, Jackie seems to know that Owen Wilson needs screentime to make with the laughs, and he dilutes his work a little too for mainstream appeal.

No. This is a cowboy film Jack.

Despite popular opinion I never joined the “Lucy Lui is hot” bandwagon. (Her turn in Futurama will let me admit she seems a cool chick though.)

He was just on the downswing by this stage.

More a collaboration using Jackie and his abilities more for the occasional “Wow” factor. 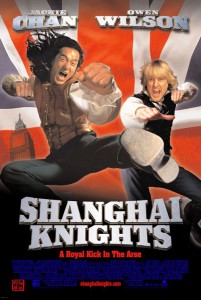 This adventure sees Chon Wang and Roy O’Bannon zip off to England for a change of scenery to avenge the death of Jackie’s Dad and casually introduce a love interest for Roy in the form of Jackie’s never-before mentioned sister. (Who IS hot by the way.)

If anything this is even more formulaic than the first, because this basically replicates Shanghai Noon with similar characters. Again we have a white guy / Asian guy baddie combo, although this time the Asian guy is the always cool Donnie Yen (underused) and a British bad guy. And instead of chasing Lucy Lui around to save her in this case we have the more eye-friendly Jackie’s sister Lin.

By making Britain a backdrop the filmmakers obviously thought the change of scenery might fool the audience from realising that we are watching the same movie in a different location, but once more despite this calculated laziness the movie is still amusing to watch and has some good action.

It does seem that Jackie decided to indulge himself a little, so there are fight scenes that are more homages to Gene Kelly dance sequences with a little Chaplin thrown in.

Not really this time. The final swordfight is pretty cool and the Donnie Yen / Jackie fight was OK but over too soon.

Nothing not involving a little CGI and some well adjusted ropes and harnesses.

Cashing in. I guess he didn’t have anything else on the schedule so knocking out a crowd pleaser with a built in audience seemed a good idea.

I must say Lin was a pretty tasty bit of alright. Haven’t seen her in anything else though.

The usual chuckles when Jackie botches a line, and a couple of knicks when the Donnie / Jackie fight got a little rambunctious as they recalled past glories.

Not really, but they do just enough to mask that fact.

This is less action Jackie than making do Jackie.

Final Rating – 7.5 / 10. Again as blatant as the formula gets this is still entertaining stuff. Hey, Coke still sells and they haven’t messed with it too much for a long time.

While I try to throw a joke or two into proceedings when I can all of the opinions presented in my reviews are genuine. I don't expect that all will agree with my thoughts at all times nor would it be any fun if you did, so don't be shy in telling me where you think I went wrong... and hopefully if you think I got it right for once. Don't be shy, half the fun is in the conversation after the movie.
View all posts by OGR →
This entry was posted in Film, Jackie Chan, Movie Marathons, Movie Reviews, Superstars, Worthwhile Movies. Bookmark the permalink.