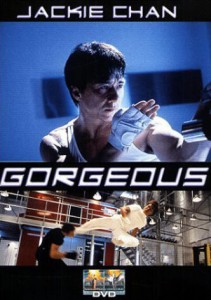 One thing I noticed more and more as I waded through the last dozen or so Jackie films is that through the dubbos his English language films got shorter and shorter (a good thing as most of them suck), and the Chinese language films got longer and longer (not always a good thing). Whether Jackie thought “well the action isn’t as good, I’ll just give them more plot I am unsure, but Rob B Hood (which also sucked) ran well over 2 hours, and Police Story 4 and this film 2 hours also. All three would have benefitted with some more savage editing, (in the case of Rob B Hood about 90 minutes could have gone and I would have been satisfied).

Anyway Gorgeous is a 90 minute romantic comedy with an incoherent and rambling plot, and a training sequence and two fights which (almost) make the whole thing worthwhile.

A hot single chick finds a message in a bottle and goes to Hong Kong to investigate. SIGH! Apparently she also is the spitting image of a renowned gangster’s girlfriend, though this has next to nothing to do with anything that follows. Upon arriving in Hong Kong and finding the note-writer she finds he is gay. DOUBLE SIGH!

Jackie is a big business millionaire famous for his squiring of random hot women, he takes a shine to the hot chick (duh!) and spends the rest of the film falling in lurrrrrve. This means we get some romance montages, walking around holding hands stuff and goo-goo eyes.

A business rival of Jackie’s tries to publicly shame him by organising a fight against a smaller man, which Jackie loses, and it’s not often that you see Jackie lose.

Being a prideful person Jackie then goes all Rocky 3 on us and we get the “Trying harder… Growing stronger” montage, which is very cool, before the inevitable finale rematch.

Given that the bulk of Gorgeous is at best mediocre, you forget how good the final fight actually is. In essence it is two men, one short white guy (yep, shorter than Jackie) and Jackie going one on one for about a dozen minutes. The moves are unbelievably quick, the action non-stop and brilliantly choreographed and even though there are some movements that are obviously wire assisted you can forgive it because it still looks believeable enough, and the rest of the fight justifies a bit of looking the other way.

Put another way, my old man came up for the night the day after I watched this. I fast forwarded to the training scene and then we watched the final fight in its entirity. I suggest if you do the same you aren’t missing much.

Mainly the finale, the best 1:1 fight that doesn’t have Benny the Jet in it.

He’s a millionaire playboy. Of course he has a lotta toys.

For some reason even though she has bug eyes from some angles and pouts too much I think Shu Qi is hot. (I think that opinion was formed more in So Close than this film though!)

All line flubs. And I mean ALL!

The training sequence is incredible, the action great, but Jackie doesn’t throw himself around as much as in the past.

It’s a Jackie film where the storyline is favoured over action. A worrying trend that would only get worse.

Final Rating – 7.5 / 10. As a movie it is worth a lesser score. But the fights are required viewing for Jackie fans.