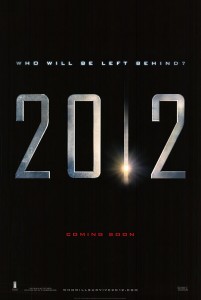 2012 shits me. Not because it is terrible or hackneyed or lazy, but because it is none of those things. It is actually pretty effective. Annoyingly so.

Why I even chose to pick 2012 off the rack I’ll never know but one way or the other it made it to my pad and sat happily in the tray for 157 minutes(!) while I hated myself for actually not hating the film, which is at least 30 minutes long by the way.

So the film. Scientists do sciency things and perform sciency type tests. The upshot of the matter is it appears that the human race is soon to be forked, as in stick a fork in it, we’re done. This is relayed to the Prez of the U.S.A. (Danny Glover. A BLACK Prez? Yeah right!) who initially sez let’s keep this on the low-low. Meanwhile Jackson (John Cusack), an author/limo-driver (now there’s a winning combo!) picks up his two kids from the ex-missus for their Daddy-Kids weekend that is to be spent camping in a National Park…

Let me just zip through 90 minutes of not much by saying that after meeting a scientist who has the answers but ain’t telling, and a pot smoking hippie played by Woody Harrelson (WHAT A STRETCH!) who claims to have the answers… but who can trust a pot smoking hippie? Jackson, kids, the ex and her current hubbie end up fleeing the West Coast of the US as it crumbles and falls around them.

The benefit of CGI is that they can be shown just evading certain death in dramatic fashion. The pitfall of CGI is when they do it 77 times per minute for an hour near death becomes a little dull.

Roland has the nous to show enough famous landmarks going under so that the audience can identify them and say “Oh, we went there honey!”. This always annoys me but what can you do. In Independence Day it was the Whitehouse, in The Day After Tomorrow it was the Statue of Liberty (Yeah I didn’t see it but it was on the cover and trailer), and here it is a variety of well known locales and landmarks.

It turns out the well-to do and those in the know are all heading to China where a Plan Z is in effect, so Jackson and hangers on hitch a ride with Jackson’s mega billionaire employer, a Russian mogul for whom he chauferred and off they go. Once in China they realize that not all will be admitted and that sacrifices must be made so that many can survive. But do they need to all die or are some decisions made so that the wealthy have more legroom? There are weasely politicians who do weasely things, especially as the deadline approaches, good people who make the “Big” decisions and try to convince others of the “right things to do”, and the usual coincidences that keep embroiling Jackson and co right in the middle of the action.

The film is essentially a big SFX extravaganza like Titanic and Avatar, you can see exactly where the money went. Like Titanic it is an overlong film with near miss after near miss that gradually gets stale and loses impact, but unlike Avatar this just doesn’t have the “WOW” factor that gets you moving around in your seat.

Near the end I asked myself just how many near misses I could take before I started rooting for nature and natural disasters to take ‘em out. Fortunately one of the redeeming factors is that the kids aren’t just little smarmy shits, in fact further to being merely tolerable near the end Jackson and son have a “serious” chat that was actually surprisingly effective… Then something exploded, some people screamed and we were back to business.

Final Rating – 7 / 10. If this really was the end of the world I’d want then to hurry it along. 2 ½ hours of disaster gets on my last nerve! The film is frustratingly effective for reasonable periods though.