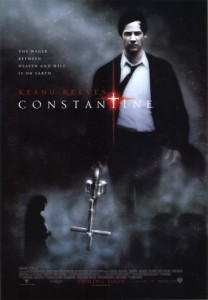 Over the years Canoe Reeves (alright Keanu) has gotten a bad wrap. His problem is that he comes across as a bit of a dumb-ass, and perhaps he is, but where his films are concerned it seems that most critics see his name on the poster and immediately think “rubbish flick”.

In many cases they are spot on (The Lake House), but I would argue that Constantine is a notable exception.

Now instead of summarising the plot I’ll touch on each of the main actors and how they went in the film. Not sure why I’m doing this, it just feels necessary here.

Canoe – Pessimistic, even fatalistic. Canoe definitely “puts in” here and actually has a crack at making the film better.

Rachel Weisz – Lends credibility to her role as the troubled Angie. Always gives the right degree of “I can’t believe this shit is happening”, and acts logically when needed.

Tilda Swinton – Casting genius as Gabriel the androgenous Angel. I can’t think of anyone that looks less like a male or female, but still appearing human, without surgery. She is also very effective in the role.

Shia LeBouf – Should just fuckin’ die. Why does Hollywood think he should be in every movie that they make when he has such an obvious personality deficiency?

Gavin Rossdale – Mr Hollaback “I was in Bush” (the crappy British band kids!) himself is generally loathsome in reality, but he doesn’t bring shame to the house Stefani built here as a demon.

Peter Stormare – Hams it up to the hilt, but necessarily so.

Djimon Hounsou – Lends a bit more credibility to a role that could have come out all Robin Williams-like.

So why would I bother putting the above in when it has nothing to do with the film? Because without that I would just be describing a film in which the lead character is trapped in a battle between good and evil, with Keanu Reeves as the good guy, Shia LeBouf as his sidekick and the guy from Bush as one of the bad guys…

No way in fucking hell that I would want to watch that based upon that info!

But Constantine is actually quite good, it is dark as comic book heroes should be, (as Hollywood has finally learned with the Batman reboots and many others), it has the theological element that I am a sucker for, and it takes itself just seriously enough that you can fall for bits where they use a bucket of water and a normal housecat as necessary ingredients as a conduit to hell (!?!), and dress Satan in a nice white suit and have him literally spit his lines.

See that? I used the word literally correctly. Not like so many boneheads today who say things like “Did you see that foul? He literally ripped his head off!” as the guy who was fouled in this hypothetical rubs his bonce and walks away.

So again rather than rehash stuff about paranormal fighting tools, exorcisms, the evils of smoking and how a club for the supernatural and occult has a bouncer who screens people with cards depicting things like “A frog in a dress”, and “Two rats on a bench”, I’ll simply say this:

Constantine has great visuals, the depictions of hell are particularly cool.

I think everyone should at least watch it rather than seeing Canoe’s mug on the poster and stepping to the right.

(And I’ll ignore the bit where the Mexican guy didn’t hear the car coming. And why the driver didn’t see him in the first place. The damn scene looked cool enough that I can set aside such logic.)

Final Rating – 7.5 / 10. More than a 2 hour anti-smoking campaign, Constantine is one of the better comic book movies in recent years and in my view is underrated.

I hated Shia Le-Boof  from the first film I saw him in, I think it was I, Robot. I hated him in this, and as soon as his head popped up in Indy and the Crystal Skull I knew that was doomed.

Why does Hollywood think this guy is the answer to all our prayers?

He sure ain’t Johnny Depp pretty, is generally obnoxious and about as funny as a used tea bag, yet he keeps getting choice roles and fucking up movies.