Survival of the Dead (Review) 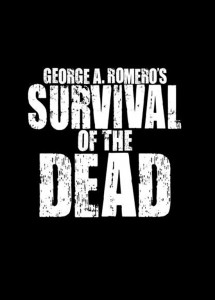 As much imagination went into this as did the film.

A letter to George Romero:

You invented the modern zombie film. You used shuffling zombies to build tension and gore effects that went beyond what anyone else was doing at the time to unsettle your audience.

But guess what? Shuffling zombies and some guts getting eaten just isn’t cutting it anymore. Not when other films are showing torture, rape, cannibalism and necrophilia to almost mainstream audiences.

Your most casual horror fan has now seen far worse onscreen than anything in this flick, and let me tell you, they didn’t have to wait 40 minutes between gore scenes and put up with the excruciatingly bad acting and dialogue as they did here.

This desensitizing of audiences is not your fault, (but realistically a bit is), it’s not entirely your fault that people are so numb that it takes an 11 year old kid dropping the c-bomb to get people up in arms, while across the hall Bruce Willis rips the throat out of another bad guy and no-one blinks anymore.

What is your fault is your total denial that you are doing anything wrong, aside from some cheap and tacky computer generated effects we get the same crappy pale zombies shuffling forward in the same shuffly way towards the same bunch of stupid humans. Only in this case for some reason we have two families, one wants to kill the zombies, the other protect them. (What?)

I’ve seen way too many guys running out of bullets and then for some reason providing access to their neck region to allow a nibble. I’ve seen too many zombies shuffling up to a seemingly oblivious person. I’ve seen too many people shooting at someone, only to have the bullet just miss and kill a zombie in the background.

Yet I still watch these films in the misguided hope that someone will bring something new to the table, I put up with the clichéd plots and TV production values. I know that, like Buffy and The A Team, that every zombie movie will be almost the same – but a tiny bit different yet I still watch.

George, the same known quantity just isn’t doing it for me anymore.

I watched Night of the Living Dead and thought it was cool, especially given when it was made.

I watched Dawn of the Dead and thought it was pretty good.

I watched Day of the Dead and can only remember how cool the early scenes were before they found the bunker, and the only thing after that worth mentioning was when the soldier got his guts ripped out.

I thought Land of the Dead was largely boring and really only the “zombies emerging from the river” bit stayed with me.

Diary of the Dead sucked.

And now… this. A film more interested in being perceived as “cool” than providing a coherent or interesting story. The work of a guy desperately trying to remain in the spotlight despite he fact that the times have changes, and seemingly oblivious to the fact his increasingly crappy films now only attract a die-hard fan base of similarly deluded hard-core idiots with only a tenuous grip on reality, whose main concern is the difference between shuffling and running zombies.

Sorry George. You lost me. You had a good career, 20 years longer than perhaps it should have been. I advise you to sit back and sign zombie related memorabilia at conventions, bask in the glory of the past and see out your last days without diminishing your legacy with crap like Survival of the Dead

Final Rating – 5.5 / 10. Not the worst film ever, but any hack can make this. Unfortunately for George, he is now that hack.