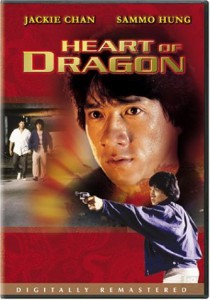 Jackie and Sammo Hung are brothers in this one which is a dramatic departure from the norm for them both.

Jackie is a Cop as usual, but Sammo is his brother with special needs, basically he acts and thinks at about an 8 year old level, and in fact that is the age of most of his friends.

Because of his limitations and size, everyone takes advantage of Sammo, kids use him to get into places where an adult escort is required, adults get him to act like an idiot or use his innocence for their needs. I must say that Sammo was always believable in his role and actually at times was so effective that you forgot he was the big fat guy who normally is the second banana in action films.

Jackie wants desperately to leave everything behind and join the navy, he also wants  to marry his missus, only Sammo keeps getting in the way, at least that is Jackie’s interpretation. At one point Jackie actually does sever all ties but soon finds himself back where he belongs.

Everything changes when a clumsy plot device embroils Sammo in a crime, when he is taken hostage Jackie must go in and save the day. We knew he was in this for a reason.

The first 70 odd minutes in this film are slow and deliberately paced, the final 20 aer more frenetic Jackie style action. The film is never boring or dull, is actually OK as a drama at times, it just doesn’t have the usual Jackie flourishes.

Only the final sequence, and even that isn’t amazing.

A couple of good falls.

Frustrated and angry, then protective.

6. Are there hot chicks (that usually can’t act)?

He does, he just ain’t using it here.

Not a Jackie Chan film (look at the “no’s” above). But a nice divergence.

Final Rating – 6 / 10. Less “Jackie” than anything else he has starred in. Not a bad film, just nothing different enough to dozens of mid afternoon matinees to make this stand out.