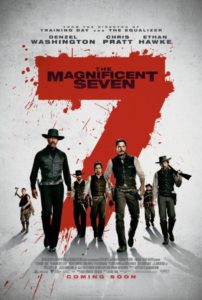 It is 1879. The town of Rose Creek is on its knees. Already in the midst of the hardest of times, now it is being plundered and ravaged by extremely violent opportunists who will stop at nothing to profit from the misery of others.

(As the signs in the town and some early dialogue tell us; in Rose Creek a farm is worth $60 and a haircut 20c. Therefore a farm is worth 300 haircuts. That’s either an extremely cheap farm or some pretty expensive haircuts. Moving on…)

Bart Bowe and his heavily armed posse have already terrified the few tired remaining farmers and townsfolk with their terrible ultimatum, leaving the bodies of many innocents in their wake, now the deadline for Bowe’s crooked ‘offer’ looms.

It will likely take no less than an army to see Bowe and his men off when they come to collect.

The townspeople turn to one man… Ok and six others.

Sam Chisolm (Denzel Washington) is a handsome and principled bounty hunter. Within a couple days he has accumulated a further half dozen men; rogues ramblers and ne’er-do-wells, ‘a bunch of strays’ as described in the film, these allegedly Magnificent Seven come from continents across the globe, practitioners of different deadly arts and driven by different motivations, some with noble intent, others driven by profit, still others just looking for something to do.

This is Fast and Furious without the huge setpieces, just a bunch of thinly drawn characters without debilitating flaws or fallibilities. No one ever does anything especially nasty or immoral. No one ever has to make a difficult decision with dire consequences. No one is ever lost for words. No one is ever in particular peril, what with this version of the Wild West clearly being the ‘they never hit, we never miss’ edition.

Amazingly, while the countless thousands of bullets flying across screen for the first ninety minutes of the film, it is only the arrival of a Gatling gun (which fires thousands of rounds per minute) that proves dangerous. I’d make a comment about US laws pertaining to semi automatic weapons but I fear it would fall on dead deaf ears.

It’s hard to dislike The Magnificent Seven but frankly it is unremarkable in almost every way. Not one signature moment remains with me only a couple days post viewing. Several of the Seven are long since forgotten beyond broad outlines, and my only lasting recollection was being certain that the film would have benefitted by excising some 40 minutes of inertia – but then paradoxically this would have made the 2 plus hour film somehow ‘less epic’.

Either way, give me the lower key stuff like Appaloosa and 3:10 to Yuma any day.

It isn’t epic. Not an Epic triumph nor a lower case epic failure. Just another film in another year. A pretty crap one for movies big budget and otherwise.

Final Rating – 6 / 10. They might call it Magnificent Seven, but really it’s a Mediocre Six.

While I try to throw a joke or two into proceedings when I can all of the opinions presented in my reviews are genuine. I don't expect that all will agree with my thoughts at all times nor would it be any fun if you did, so don't be shy in telling me where you think I went wrong... and hopefully if you think I got it right for once. Don't be shy, half the fun is in the conversation after the movie.
View all posts by OGR →
This entry was posted in Denzel, Film, Movie Reviews, Superstars, The Grey Area. Bookmark the permalink.