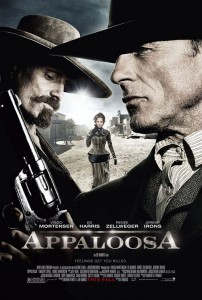 They don’t make Westerns like they used to… and by that I mean they just don’t make many Westerns period these days. Rotten Tomatoes lists only 33 Westerns in the dubbos with enough reviews to get a rating, and basically half of those were deemed rotten (the chicks with guns flick Bandidas inexplicably gets a Fresh rating, Shanghai Noon is another!).

My Dad grew up on Westerns, still watches pretty much exclusively Westerns and was the only reason behind me plucking Appaloosa from the video shop shelf recently. Having less than 2 films per year in his favourite genre must suck – and by reckoning half of those weren’t true “Black hat – White hats facing down at sunup” Westerns.

Less than one a year… Appaloosa was one of the 17 good ones.

As Appaloosa adheres to the Western tradition of keeping things simple the story has two tough looking gents a-riding into the town of Appaloosa one day as the previous sheriff is now feeding the worms.

These two gents have been hired by the town’s big-wigs to keep the peace and basically protect the citizens from a ruthless local rancher Randall Bragg (Jeremy Irons) and his men who exhibit – to coin a phrase – outlawish tendencies. 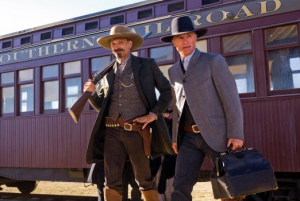 Virgil is a quick draw and a quick thinker, his main asset is perhaps the fact that he knows that while quick he can’t take down too many guns at once, and while a thinker he might not be the most intellectual man in the wild west. To remedy this he rides with Everett, who is similarly quick on the draw but carries a big “Don’t argue” shotgun and fills in the gaps in Virgil’s vocabulary when called upon.

The duo set upon restoring peace to the sleepy town, firstly by letting Bragg and minions know that they aren’t having things their own way from now on.

A tenuous stalemate comes to pass for a time… then a woman arrives to ruin it.

My only issue with this film is the fact that the woman who has arrived into Appaloosa by train, Allison French, is played by Renee Zellweger – I know it must have been said but she looks like she’s just swallowed a whole lemon at all times – and it’s only worse when she *GULP* smiles. With a look like that I am genetically predisposed to detesting every noise or line that she emits thereafter, and I did here. (Even my Dad said “I wouldn’t get shot for her” at one point.)

Allison quickly realises that Virgil is the Top Gun in Appaloosa and hooks her claws into him. Bragg equally swiftly works out Virgil’s new fugly weakness and arranges for Allison to be taken, and Virgil inexplicably doesn’t just decide “Phew, I nearly married it” but decides to head after them. 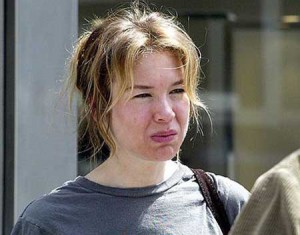 Even cowboys must have standards!

And then the film proceeds as cowboy films must, with saddle sores, gruff terse dialogue and quick shootin’.

To describe more would be a disservice to the film, suffice to say Appaloosa is an entertaining film, the action is scarce on the ground but carries an impact when it arrives, the effortless interplay between chatty Virgil and the more reticent and thoughtful Everett is well written and often amusing, and Irons creates a solid bad guy as Randall Bragg whose larger than life demeanour steals each scene that he appears in.

Being born a little late to fully get into the Western genre I must admit I seldom look them up, but if I see a trailer that looks gritty and realistic I will pick them up at the video shop, if they were all of the calibre of Appaloosa and weren’t released so far apart this might happen more frequently.

Final Rating – 7.5 / 10. Westerns don’t come along too often these days, good ones even less frequently. This is an solid, efficient and entertaining Western that manages to overcome Zellweger’s lamentable cat’s arse of a face.