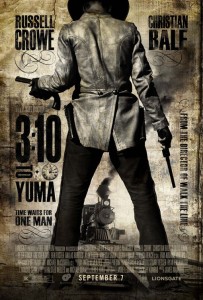 Most mismatched game of chicken on record.

Dan (Christian Bale) is a rancher facing the loss of his ranch, which might just make him an ‘er. His Civil War heroics mean nothing now, and the bank has informed him that unless he makes a payment on his debt soon, his lands will be repossessed to allow the new train line to run through them.

With the final straw breaking some weeks previous, Dan takes a job in desperation, standing to be paid big dollars to help escort wanted criminal Ben Wade (Russell Crowe) to face justice. In irony of ironies, the same train line that would represent his destruction also represents his potential salvation, seeing as the Yuma train station is the drop off point and therefore Payday Station.

But Ben Wade – always the full ‘Ben Wade’, rarely ‘Wade’ and never just ‘Ben’ – is worth big bucks for a reason. He has stolen much and killed many. For his part Wade (snubs tradition) rarely disputes nor revels in the claims made against him. He does though see very dimly those who would disparage or attempt to bully him.

Wade escapes on no less than three occasions in under 36 hours, despite being tied up and monitored by armed men. This means either Wade is some form of superhero, or more likely Dan and the four or five other guys are pretty shit at their jobs…

In any case Dan and the small escort posse move Wade through desolate areas and Native American guarded lands, pausing only to permit Wade to escape for a while. As this ineptitude continues, Wade’s gang – fronted by the confrontational and violent Charlie (Ben Foster) – attempt valiantly to track them down in order to free their leader even though he frequently manages this at least temporarily himself.

At one point Dan’s headstrong (read: dickhead) son shows up to ‘help’ with the mission, but he is far more extraneous and annoying than necessary. In fact this is quite a procedural and predictable affair, albeit with a couple of magnetic leading names and a fine supporting cast.

As Dan and Wade respectively, Bale and Crowe are in almost every scene in the film, chatting throughout even as Wade whittles down Dan’s travelling companions in various violent ways. Without this star-power the film would be just another western, and it is, but a better one than it needed to be.

Final Rating – 7.5 / 10. It seems much easier to craft an entertaining Western than it seems to find an audience to pay to watch it.