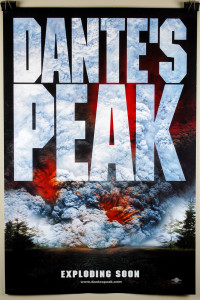 Harry (Pierce Brosnan) should hate volcanoes. One took his fiancé. But no, news that centuries dormant Dante’s Peak is showing signs of stirring like a teenager at noon has him positively giddy.

A team accompanies Harry – the usual quirky crew of quippers and oddballs – and on arrival they find Mayor Rachel (Linda Hamilton) accepting an award on behalf of Dante’s Peak for Most Beautiful Town. I just hope there was no cooling off period…

… Actually nothing cools off from here. Quite the opposite. Like Twister, San Andreas , The Day After Tomorrow, Volcano and others, once Harry proclaims the volcano is soon to blow, everything flows like clockwork. Or lava.

Of course the locals don’t want warnings about natural disasters; property values and such. And Harry’s own superiors warn him against bold claims. But then temperatures rise, soot and ash emerge, with the town costly positioned right at the foot of the volcano. Right in its path.

If Harry took his own advice this film would be called Harry’s Wisdom, but that wouldn’t have been much of a film. It seems crazy simple to make a natural disaster film mostly entertaining. Even in the lesser films mentioned above there is something about having humans flee encroaching death from one’s own couch I guess.

Dante’s Peak knows the score. It has Harry, Rachel and the inevitable ‘kids that must be protected’ run like Jack and Rose across the Titanic. Toward the lava, away from the lava, across and through the lava. Each escape more miraculous and unlikely. Each pause for breath bringing the molten liquid to within singeing distance yet again.

Brosnan and Hamilton are perfect as the fleers too, both likeable but harmless, not nearly dangerous enough to wish harm upon or buff enough to be more powerful than an exploding mountain. And I’ve already forgotten about the kids.

Final Rating – 7 / 10. Brosnan has an ad omnipresent on tv at the moment where he uses that syrupy voice to say “I like explosions”, Dante’s Peak is mindless and mostly entertaining proof of that.