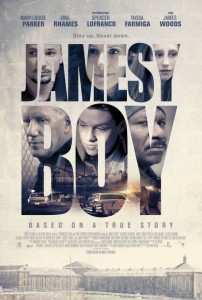 James (Spencer Lofranco) is fresh faced and handsome, seeming more youthful than even his tender years suggest. Even in his early teens James has a lengthy history of dealing with authority. This leaves his supportive mum Tracy (Mary-Louise Parker) at her wit’s end. If James cannot help himself who can?

Guillermo offers his assistance. Though in reality he wants another impressionable boy seeking quick cash to help his drug dealing business. Unfortunately James thrives. He makes his own cash, gets a new girl in Crystal – herself another source of negative influence – and feels his continued poor behaviour as justified.

When James inevitably lands in prison, he faces continued choices. Toe the line, or continue to push back.

No prizes for guessing which route he takes.

Inside James finds his mum remains predictably supportive. He finds his warden (James Woods) also predictably hard assed, though he is transparent a to why. He also  comes to deal with a surly quiet loner Conrad (Ving Rhames), a man who has killed five people but beyond the omnipresent scowl doesn’t seem the dangerous type. His words seem nonsense to James initially.

There are many films about incarcerated young people either seeking or declining their chance at retribution. The claustrophobic prison environment and the inherent dangers within render the opportunity all the more valuable, meaning the stakes are higher and the drama more palpable, especially when the inmate could be so much more.