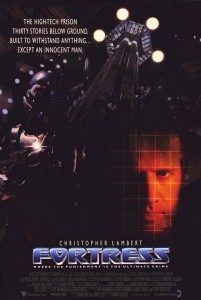 Christopher Lambert is Brennick. He is married to Mrs Brennick (natch) and between them they have made the crucial mistake of having a second child.

The penalty – which seems harsh in any language – is a sentence in a maximum security prison, with internal devices that cause great pain if you wander outside marked areas; or if the warden decides you’ve earned a jolt. Which is often, because Poe (Kurtwood Smith) the warden is a prick.

Brennick must either find a way to get to the women’s wing which is kept elsewhere, or escape the inescapable facility, all while dodging real criminals who did not like his work in Mortal Kombat (and I don’t care if that film came out later. This one is set in a future where it didn’t)…

The production looks like a cut-rate version of Total Recall, which in itself isn’t a surprise as apparently Arnie was to star in this film. When he opted out they slashed the budget and whacked Lambert in. The film is more violent than you might think and blood gushes freely in some scenes, but not in inventive ways.

I could try to conjure up some fluff about how Fortress has fresh ideas and a novel approach but I’d be lying. There’s the bad inmate, the bad guard and the bad warden. There’s the techie inmate, the old wise black inmate and the quiet introverted inmate.

Most of all there’s Lambert, who hasn’t a single distinguishable characteristic that can give a hint as to why he was a minor blip on 1990’s b grade cinema. Obviously he lucked into Highlander but surely that wasn’t enough?

Nonetheless they try and fail here to impose a franchise upon us, and while the premise is proven reliable and some of the low budget ideas initially mildly interesting, there isn’t enough here to warrant a second glance. 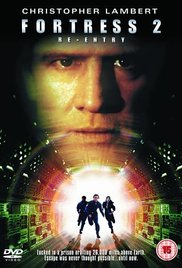 Remember about twelve words ago when I said Fortress wasn’t worth a second glance? Welcome to Fortress 2: Re-Entry…

Brennick is recaptured and chucked right back into a new facility watched over by Pam Grier. This time it’s in space.

Then, it’s tick off the prison cliches in space. They even use the ‘loop the security video to fool everyone that nothing is happening’ trick.

I watched both of these films last week and am already mixing them up. Just know that neither are worth watching, but if you absolutely must, make it not this one.

Final Rating – 5 / 10. The Fortress via an Incredible Entertainment Shrinking Machine.