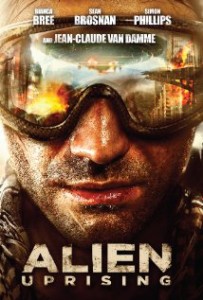 It was a good 35 minutes into Alien Uprising and despite clear recollection that I had already seen the title in the credits, I was positive I was watching a different movie.

The first half hour has idiots clubbing, a one night stand, the requisite hangover, morning grumpiness and then finally… Aliens.

But we never see the aliens. We eventually realise that this is for no creative reason, it’s because they are prolonging the disappointment.

You cannot delay the inevitable forever though. Like 28 Days Later this is a film of two halves, unlike that film the first is terribly boring and the second just terribly terrible.
JCVD shows, but this is not a JCVD movie. This is not much of anything beyond morons talking incessantly as a cameraman circles them (seriously it happens like eight times).

The aliens show up but they look like the atrocious special effects that they are. But they are not even here for any reason beyond getting the film green lit. They, like the human characters, are not here to further the film, just to pad out the ninety minutes and give a buzz word to the title. A more apt title would be Cinematic Abomination.

Final Rating – 4 / 10. If this isn’t enough the film closes with an unbelievably misguided and ill fitting ending about rape. So that’s nice.