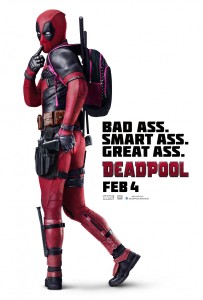 He’s not afraid to look stupid. He doesn’t care about looking cool, even though he remains fully in control despite being a passenger to a vehicle in the process of flipping uncontrollably. He says what we wish we could. All of those times you wish you had a snappy comeback to a snide comment – he has one. And also one for a thousand other times that don’t need one.

It’s him knowing he’s not cool that makes him so cool. Apparently…

Yep Wade Wilson (Ryan Reynolds) aka Deadpool is the superhero with sass. The cape with the jape. But is an acid tongue and an incorrigible demeanour really enough?

When others grin at the steady stream of inanity that spews forth from behind the red mask, I grimace. The Best moments reminded me of far superior Kick-Ass. The rest, actually the Most, are pure Deadpool.

Surely real ‘comedy’ emanates from something more than stringing two random words together; dick-cheese, butt-nuts etc? Surely the fact that the guy wears Crocs, that he has a pink weapons bag, that he loves bad music, isn’t evidence of superior writing?

And he pays for Uber rides with high fives! Hilarious?

Ok let’s ignore the state of modern comedy. What about the story? Well Wade Wilson is the guy forced to desperate lengths when informed of his cancer, but he approaches the wrong bland European (obvious) bad guy.

When said faceless bad guy tortures Wilson and disfigures him horribly, Deadpool is ‘born’. And to be frank I think the next bit chronologically in the film is Deadpool hunting the Bad Guy, though the story is chopped and diced to appear to be much more.

Now being forcibly and unwillingly mutated is enough to give anyone a new perspective on life, it cannot end Wilson’s stream of nonsensical dribble. Nothing can.

Elsewhere Morena Baccarin pads her CV as Vanessa the hooker girlfriend, TJ Miller (I assume) dumbs down his comedy to match Reynolds buffoonery, and Gina Carano gets a go at being a comic book hero baddie.

It seems the studio had doubts of their own – which to be fair the film pokes fun at a few times – so there are only a couple action sequences across the two hours, and the two Marvel guys that they consented to appear here are both instantly forgettable and entirely inessential.

I resisted this film for a few weeks before reviews and a couple mates convinced me. I wish I stuck to my guns. This was exactly the film I feared, two hours of throwaway lines and self effacing ‘can you believe we’re getting away with this?’ stupidity masquerading as an ‘anti-commercial’ superhero alternative.

I laughed once during a conversation between Deadpool and the Uber driver, I never gasped and never felt entertained for a nanosecond. None of those moments or emotions are essential, but they certainly elevate the quality from the ordinary.

Final Rating – 6 / 10. It’s the finest line between irreverence and irrelevance. (Deadpool would have a comeback for that. It wouldn’t be very funny but some would grin just because he had one…)