“You’re, gonna laugh. You’re gonna cry.” That’s either a warning that there’s a Keeping up with the Kardashians marathon coming up, or a a cautious endorsement of a film. In the case of Hawk the Slayer, suggestor Gaylord69 is half right…

In reality films like Hawk the Slayer are why this website exist. If you want to know about the latest Transformers: Abomination film there are a bazillion eager idiots willing to impart their sugar frosted views. Ditto anything Ferrell; “THEN HE GOT NUDE AND YELLED AGAIN!” Thanks for the insight, Random Guy.

But who will champion the lesser and/or obscure films? The X-Tros, the Big-Man Japan’s, the Avatars… OK not so much Avatar.

So, a Friday night, a dvd purchased off eBay, four beers downed (and four to go) and wrist deep in a bag of chips. Let’s get it. 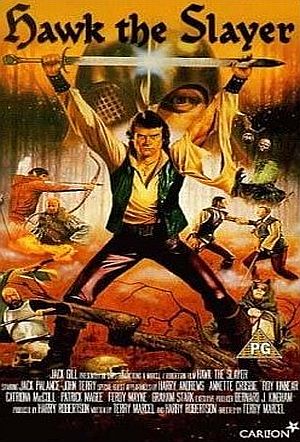 You only get one chance to make a first impression. Here is where Hawk the Slayer is a stickler for consistency. The man might as well have a ‘Vacancy’ sign flashing on his forehead. It’s like Kuarto held his hand and hissed “open your mind” and Hawk misheard ‘open’ as ’empty’. There are actors who lack charisma, Hawk is a charisma burial ground with a mullet.

Still his task is a noble one. Fuelled by his dying father’s last words – delivered between five minutes of hokey gasping – Hawk and his mind controlled sword cross many dangerous lands and several clumsy plot flashbacks to confront the evil and overacting Voltan (Jack Palance), a man who stole much from Hawk; his girl, his father, his charisma.

Hawk knows he cannot carry out this mission alone. His blank expression tells us that. Actually his blank expression tells us nothing. It seems Hawk is as expressive as he is helpful, and he is certainly not a preventative hero. In each encounter in the dangerous woods (where many a shitty Robin Hood film was no doubt shot) Hawk watches on as people are beaten and tortured, waiting for the most dramatic moment to interject…

He misses the right moment every time, but still manages to kill some guys and in the process save some other guys.

I did not realise this at the time, but what Hawk was doing all along was seeking to reunite the Hawksome Foursome (Patent Pending); A robotic talking elf, an afro’d dwarf, a six foot two ‘giant’, and another guy with a crossbow that I forgot already (might as well name him Hawkeye, hey Avengers?)

They are not unarmed, however their weapons are not the usual kind, slo-mo shots and jump cuts do most of the work here. They enable our crossbow and archer guys to fire hundreds of shots per second. They assist others to move swiftly or slowly, whatever the moment demands. It might be more a sign of the era and the budget but suffice to say Peter Jackson did not steal much from this film.

To his eternal credit Jack Palance tries to remedy this, delivering a bug eyed and spittle spraying ‘performance’ that may be the only thing you remember a week later.

Ultimately, despite the noble intentions, Hawk the Slayer avoids ‘so bad it’s good status’ because it refuses to embrace the lunacy and limitations. It isn’t hilariously woeful or astonishingly misguided, just regular cheesy and awful. It might be another example of a time where impediments like lack of budget, script and production values could not prevent a film from being made, but in a world of Krull, Beastmaster and Miami Connection, Hawk the Slayer cannot make the The Last Dragon or Mega-Piranha leap to Must-Watch, Can’t-Unsee status.

Final Rating 4.5 / 10. Thanks Gaylord69, you owe me a feed at this dubiously titled restaurant. Happy April Fools day.

1 Response to Hawk the Slayer (Review)