The Woman in Black (Review) 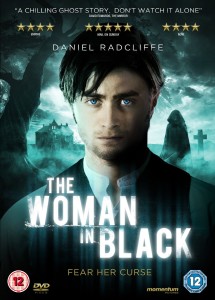 Arthur Kipps (Harry Potter) is an aspiring young lawyer desperate to keep his jobs in hard times. With a small child and a deceased wife, Kipps must above and beyond to ensure the family piggy bank is fed. This leads him to taking on an assignment in a remote location, going through the estate paperwork and assets of a recently deceased loner.

The equation is simple; wind up the estate, keep your job.  But horror movies are not maths, and the equation becomes infinitely more complex.

The locals are far from welcoming of Kipps, especially once they learn of the reason for his presence. They hinder him and hurry him along, forcing him to take on all responsibilities himself. Only one man offers more than open disdain, Sam Daily (Ciarin Hinds), and even his wife is nuts.

Undaunted and a little desperate, Kipps arrives at the large isolated home situated precariously in the middle of a large marsh and replete with its own cemetery, and sets to sifting through the cluttered mess of miscellaneous knick knacks and the reams of handwritten papers that litter each room.

Even after the faces in the window, the figure in the garden and the bumps in other rooms, Kipps remains committed to his task. He could sure show the modern day kids a thing or two about sticktoitiveness.

The film is well crafted and deliberate… for a while. Eventually it succumbs to quick edits, loud noises and the usual boo trickery, with the latest thirty odd minutes effortlessly switching to Mama in Black mode.

Throughout Radcliffe commits himself wholeheartedly, lending much needed credibility and no doubt a few million adolescent wizard lovers. But when the material is still an example of middle of the road ‘boo!’ horror, and the scares are reminiscent of a dozen other similar films, it remains the equivalent of trying to posh up proceedings by pronouncing your local chain store ‘tar-zhay’…

Final Rating – 7 / 10. The Woman in Black puts a clipped British accent and a some nifty period togs on a well worn storyline.