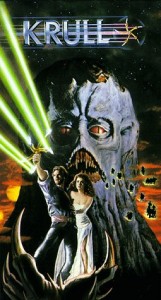 For decades I thought Krull was just another Conan the Barbarian clone, a shirts off muscle headed brain-dead hack ‘n’ slash adventure. So I never bothered with it.

Then the other night I flicked it on, and from the opening line of narration I was hooked…

“This it was given me to know”

Wow anything that pompous and pretentious is either a masterpiece or an incredible mess.

Krull is no masterpiece folks.

In fact Krull is not a character but a land. A magical, unbelievable medieval land as seen through an 80s filter, with feathered mullets, puffy outfits and awfully choreographed ‘action’ sequences for all.

Then aliens come and abduct Prince Colwyn’s soon-to-be Princess (you heard me), killing his Father and promoting him to King Colwyn in the process.

The nasty aliens are apparently the minions of the Beast. They have taken the Princess to the Black Fortress like faceless hordes of Bowsers absconding with Mario’s Princess Toadstool, though unlike the classic 80s game instead of taking the prisoner Princess from castle to castle, the Beast simply magically teleports the Black Fortress from place to place daily.

Not that this matters to our King Colwyn, the Taylor Kitsch of the 80s. He decides that he will save the Princess regardless of the cost, but as we all know the Beast cannot be defeated without the Glaive – sort of a golden ninja throwing star for nerds. In a 15 minute sequence (that mostly consists of Colwyn climbing small non-threatening rocks) he manages to find the mystic weapon, and on the way home he forms something of a cut price, bottom of the barrel Fellowship, consisting of some old guy that has all the answers, a bunch of escaped convicts (including a young Liam Neeson and Robbie Coltrane!), a creepy giant Cyclops, and Ergo the Magnificent, the supposed comic relief character whose spells always seem to backfire.

And then with this mismatched group of both the pathetic and the pointless it is onward to the Black Fortress, through the obvious sound stages full of smoke machines, past the cheap looking props and toward the shitty cardboard Fortress full of awkwardly costumed aliens.

Krull is gloriously so many things…

As I gasped and grinned my way through every unfortunate scene and ham fisted moment, some of me yearned to shout the virtues of Krull from the rooftops, proclaiming to one and all that ‘You have to see this’. And in fact I still think that Krull must be experienced – just not the full 115 minutes.

Consider Krull then like a traveling Freak Show, definitely worth a quick look (maybe a Youtube clip or two to prove beyond doubt that it is one of the kookiest films of the 80s), but no-one buys season tickets to the traveling Freak Show… just like no-one should have to sit through the entire two hours of this.

Final Rating – 5 / 10. It was given me to know, that Krull is part Flash Gordon, part Fraggle Rock and part Conan the Barbarian – but all unintentionally hilarious.