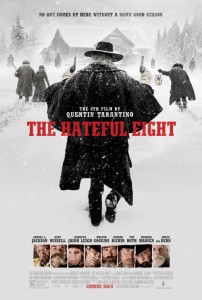 By the time the stagecoach arrives at Minnie’s Haberdashery, an out of the way ‘do it all’ store catering to weary mostly travellers, it has braved not only a burgeoning snowstorm, but picked up a couple stranded hitchhikers, meaning it has four very well know occupants.

Once inside they find four other men already inside staying out of a storm that threatens to leave them isolated for days. In Tarantino style we spend an hour learning much about all inside – but of course not everything. We learn that most seem to be lawmen, soldiers or people who feed off of them, including blunter hunters plural and a hangman. Only one of these eight is not like the others in any way, seeing that Daisy Domergue (Jennifer Jason Leigh) is the only female and the only known criminal within the walls, though she is handcuffed to her captor John Ruth (Kurt Russell) for the majority of the films two and a half hour plus running time.

As the blizzard swirls and eddies outside, all look sideways at each other in unease, knowing that they stand to spend the next few days with almost absolute strangers. Some keep to themselves, and some, most notably Major Warren (Samuel L. Jackson) verbally spar with the other guests hoping to learn more.

To be frank this middle hour is extremely similar in tone to The Thing, and not just because Kurt Russell is here. The ‘who to trust?’ tension is palpable, and even the pulsing synth thud soundtrack sounds like it could have been lifted direct from the early 80s paranoia horror classic.

Unfortunately this compelling set up is again let down by Tarantino’s inability to get to the point, which is evident in both his interviews and every film since The Bride decides to get even with a flute player named Bill. Nonetheless this is his best film since Kill Bill Vol. 2, but if QT’s name was replaced with an unknown director’s in the credits it would be only lauded as a ‘promising debut’. Because every Tarantino film seems to open with a media blitz and an audacious and pretentious ‘the Xth film by Quentin Tarantino’ credit, it must be dubbed a mild – though still indulgent – return to a semblance of form, but still a million miles removed from Reservoir Dogs or Pulp Fiction.

So at this point with every Tarantino film review I ponder what has caused this arrogant monster that dubs all that find his films pretentious drivel and the work of someone slipping, Neanderthals.

Well it starts with the man himself. While obviously a cinematic savant that has become both his blessing and his crutch. The notoriety of his chargers becomes more important to QT than what the characters themselves do in his folks. The source of his inspiration has become more important than his film they inspired, especially in his many promotional interviews.

In fact talking about his film, his inspiration, his genius, has become the game, only bettered by his bragging about the latest reclamation project that he has performed on an actor thought lost to credible cinema. This time around it is Kurt Russell again though familiar faces abound, including Michael Madsen, Tim Roth and even Zoe Bell in a blink and you’ll miss it role.

To Tarantino it seems that making an impression is no longer the source of his drive and hasn’t been for some time. It’s impressing the right people. To those of us dubious to his relevance and credentials this is nonsense, to Tarantino and his many acolytes, it is evidence of our obliviousness.

Except we are many in number, and with each indulgent over-talking, under-delivering effort that we are unfairly expected to fawn over, we grow…

The Hateful Eight is a step in the right direction (after a few breakdancing horse missteps), but if this quality level doesn’t increase quickly I for one will not be depressed if Quentin Tarantino’s 10th film does indeed prove his last.

Final Rating – 7 / 10. So eight characters walk into a bar see, and three hours and several chapters later, something happens…