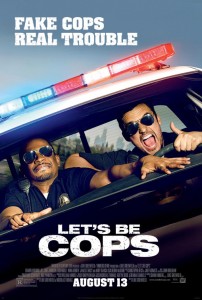 The paper thin premise of Let’s be Cops relies on the concept of the universal moron. The pretend cops must be morons to try what they do in the first place. The crims and real cops are morons to fall for the ruse, and we the viewing audience are morons for paying to watch this.

A struggling video game designer and a wannabe football player attend a fancy dress party in law enforcement officer attire. The reception on the way to and from the party convinces them of the merits of a more structured ruse. Because as you, I and everyone else knows, beat cops get all the respect, love and unsolicited female attention.

Of course their pretend policing runs them afoul of some very real dangerous gents, leading to them being forced to focus all of their non-existent training and experience on extricating themselves from a ludicrous situation.

If only it was as easy for us.

I watched this film and Ride Along in the same week and I found my pre-conceived ideas only half right. I fully expected to find nothing but distaste for both films, but I almost liked Ride Along. Let’s be Cops isn’t as ghastly as the above makes it out to be, but it has precious little going for it, and a couple muffled laughs aren’t nearly enough justification for lazy crap like this to exist.

Final Rating – 6 / 10. Like Pineapple Express and Nuns on the Run, it seems we must have a film where ‘people pretend to be people they are not’ every few years.