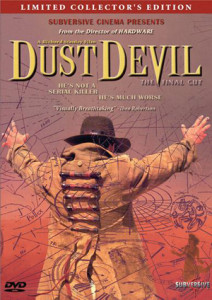 He roams the orange-red African roads, inhabiting bodies and harvesting souls. He dresses like a gunslinger and wields weapons that he uses with ruthless efficiency, leaving grisly scenes in his wake. His actions are cold but calculated, performed with painstaking care and determination; ornate displays of bloody evil.

Wendy is on a road trip to nowhere, driving only away from a husband that burned one last straw too many. When she picks up a handsome stranger on the roadside she isn’t thinking of danger. She isn’t thinking too hard at all…

Dust Devil sounds like a compelling concept, and the washed out colour of the arid landscape and long dialogue free scenes are admirable traits. The problem is that the film wants to be sit on the fence, to be half pregnant when that isn’t possible.

Maybe it was budget constraints. Maybe studio interference. Whatever the reason there are themes introduced and not followed up. The Dust Devil himself is explained as being something otherworldly – indeed we are given some evidence of this – but several opportunities to broaden and expand upon the character are ignored.

Some of this is exacerbated by a voiceover that also suggests there are facts left on the table, and by a finale that screams ‘incomplete’.

Final Rating – 5.5 / 10. Dust Devil could have been anything. It could have been The Hitcher via Angel Heart. Instead it comes across as a passion project bedevilled by unwanted compromise.