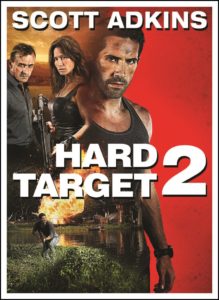 Tragedy brought former MMA fighter Wes Baylor (Scott Adkins) to Thailand. Now he fights Rambo 3 style for small purses in order to do just enough to stay off the radar and away from the horrible memories.

Only the lure of One Last Big Payday can convince Baylor to betray his principles and emerge from anonymity. Alas he trusted the wrong guy, and within hours Baylor finds himself on the run pursued through dense jungles by a group of paying clients baying for his blood and vying for the opportunity to take him down.

Solid but familiar premise, but hopelessly betrayed by inferior execution. The so called wannabe assassins are all cardboard cutout ‘ugly Americans’ with the exception of the unfortunate Rhona Mitra, who at one point seemed poised to become a minor B movie star, but somehow ended up a parody of herself. Now she looks like the offspring of Steven Tyler and an axolotl – which knowing Steven Tyler is actually a possibility – and acts with the conviction of someone trying to talk their way out of a video shop late fee. She’s trying, but she knows no one is buying it.

Against this backdrop of useless Scott Adkins has nothing to soar over, crunch through or high kick. Instead he simply wafts through proceedings with a young Thai girl name Tha, doing just little enough to allow the bad guys to remain close, and teasing us with a ‘love scene’ that never arrives. (Hey it’s an MA film, as a male it’s ingrained to expect a little female nudity!)

Two things convinced me to watch Hard Target 2: the first is the long held view that Scott Adkins has a ‘capital G’ Great Action film in him. The second is the fuzzy recollection of the original Van Damme film.

Both hopes were admittedly long shots, and both were squashed swiftly under the weight of ineptitude, both in front of, and behind, the cameras.

Final Rating – 4.5 / 10. As a result the only Capital Hard Target 2 gets is a D, both in grade, and as the first letter of Disappointment.