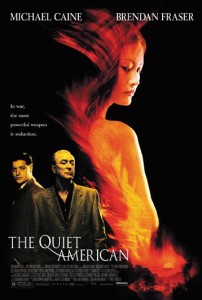 The Quiet American begins slowly. It is 1952 in Saigon, a Vietnamese city rife with civil unrest and torn apart through daily acts of terrorism. “You’ll learn the sound of a grenade exploding very soon”, one man tells a newcomer.

Fowler (Michael Caine) is a British reporter long since used to the atrocities perpetrated here. Almost a local, Fowler moves about the city unnoticed. He has also taken to a beautiful young girl named Phuong, a serene and calm young woman who he ‘rescued’ from a bar. Fowler offers Phuong a better life and protection. Phuong offers him a chance to find some of her calming influence.

This changes with Pyle’s (Brendan Fraser) arrival. A younger, idealistic and noble young doctor, Pyle is charismatic and charming. In a bold but extremely politely executed move, Pyle offers to take Phuong for himself, right from under Fowler’s disbelieving nose, knowing full well Fowler cannot marry her honourably as he is still technically married to a woman in the UK.

What follows is the most polite game of ‘dibs’ imaginable. Both men parry verbally, often with Phuong standing and watching on, and even though it is clear that the two men would likely be friends in another life, the tension between them is palpable.

Fowler knows that without Phuong he is empty, and Pyle obviously believes things would be better for all involved if she were to go with him.

And all the while explosions ring out in the streets daily. Some big. Some small. Though the real conflict is being waged elsewhere with mass murders and slaughter being carried out in the outskirts of the city.

Michael Caine is as always excellent, and Brendan Fraser is also very good in a pivotal role. Even though Phuong need only stand silent while looking very pretty, this is something that she does extremely well.

The film is somehow directionless for a time, seemingly tiptoeing toward a revelation that will assist Phuong with her choice. But this isn’t that film. While you might not guess the outcome the film holds course and moves deliberately towards its destination. Without spoilers, the destination is a worthwhile  though for a time you wonder why you have chosen to spend two hours with a romantic period drama.

Hold the course. It’s worth the journey.

Final Rating – 7.5 / 10. An excellent character study inside a bigger story.