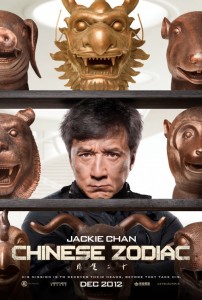 Any discussion of Jackie Chan needs to start by discussing the past. The reasons Jackie finds work in these modern times can be found in any middle-aged action movie fan’s DVD collection. The covers might gather dust but the memories are crystal clear.

But they are becoming more distant.

Police Story 2013 was a sad reminder that Jackie Chan’s best is no longer sufficient, remarkably though Chinese Zodiac goes a long way to dispelling that belief. At least partially, and mostly because Jackie permits younger legs to come in and help out.

Jackie is back as an Asian Hawk from Armour of God type. This time around for convenience’ sake he is dubbed JC throughout. Where the Armour of God films were endlessly inventive and built around young Jackie’s singularly incomparable talents, this is eventually a collective effort.

As a magazine photographer and relic collector for hire, JC is tasked with collecting the famed 12 Chinese statues of the zodiac, bronze busts with enormous value. The problem with things that are worth lots though, is that thieves, collectors and assorted rich people types want them for themselves.

This competition creates the conflict.

Chinese Zodiac improves as it goes along. After a sleepy first third it switches gear into a busy but slightly confusing Pirates of the Caribbean influenced middle section. While entertaining it is hardly vintage Jackie, but perhaps it loosened his ageing limbs up, as the last half hour is as close to ‘vintage Jackie’ as anything since his Shanghai Knights days…

There is a close quarters fight that takes place largely on a couple of couches that proves the inventiveness is still there, and a couple other fights also pay their way. Chinese Zodiac is still not a patch on Jackie’s best, but is an awfully long way ahead of much of his recent stuff.

Final Rating – 7 / 10. Don’t call it a comeback – because it isn’t – but a huge improvement nonetheless.

P.S. If nothing else the end credits include a Jackie Chan career highlights montage and a thanks message that might just bring a tear to your eye.