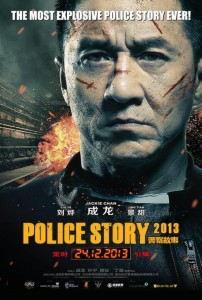 The spirit is willing. The application and desire both admirable. But the inspiration and physicality has left the inimitable Jackie Chan. Even this, one of is best in a decade, is rough around the edges and lacking in many areas.

Jackie plays a jaded senior cop calling on his precocious – read; bitchy and ungrateful – young adult daughter in a crowded hip nightclub. It is here that she has chosen to break the news that she is dating the much older nightclub owner. She feels she will get a rise out of her dad with this revelation.

But that’s hardly relevant, as within minutes of this bombshell comes a second, far more serious one, Jackie, his daughter and several others are taken hostage within the club.

The reasons behind this hostage situation are confusing. The justification for it all is thin. This series has nothing to do with the Police Story trilogy of the 80s, that had action unparalleled and humour aplenty. This, sadly like Jackie himself, is slower and a bit tired.

It wants so badly to be Die Hard Again, but Die Hard is a young man’s game, regardless of what Liam and Denzel would have us believe.

In the glory years Jackie Chan movies scheduled some chat and a couple jokes in between the incredible fights and the jaw dropping stunts. Now it’s a few fights between long talks, with the jaw-drop causes by reluctant yawns.

Final Rating – 6 / 10. Jackie could still beat your grandpa up, but until there is a market for grandpa fights that will remain an irrelevant title.